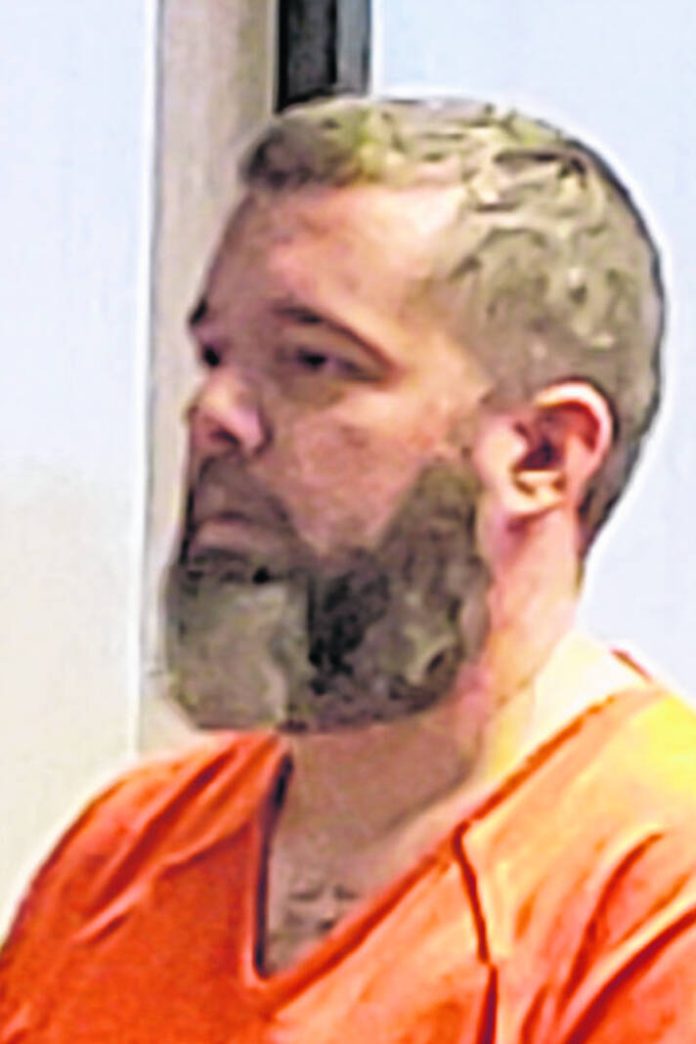 A Perrysburg man who escaped custody at Wood County Hospital, stole a car downtown and was apprehended in Michigan is going to prison.

Christopher Eldredge, 36, was transported from the jail Oct. 7 to the courtroom of Wood County Common Pleas Judge Joel Kuhlman.

“Obviously, the escape is a significant charge because he was already under arrest for other matters,” said Wood County Assistant Prosecuting Attorney Jim Hoppenjans.

But the impact on society from the grand theft is a more serious, he said.

On April 9 after being arrested for theft, Eldredge was taken to the hospital because he said he had swallowed four small bags of heroin.

He was released from his handcuffs to use the bathroom and was told not to flush, according to previous reports.

When the deputy entered the bathroom to make sure Eldredge followed directions, he took off running.

He stole a blue 2020 Hyundai Tucson, which was later recovered in Toledo.

He was arrested April 22 in Michigan.

“It was quite the traumatic experience for them,” Hoppenjans said about the salon patrons. “I’m not sure there was an explicit threat, but it certainly was implicit.”

He asked for restitution of $250 for the woman whose car was stolen to cover the deductible she paid to get it repaired.

“That impact on her I don’t think is something she is easily going to forget,” Hoppenjans said.

Eldredge was arrested after Perrysburg Township police were advised April 6 that he was a person of interest in a stolen golf cart, taken through a breaking and entering.

Police drove by Eldredge’s home and spotted a golf cart.

Police initiated a traffic stop of Eldredge’s Jeep and reported neither the license plate nor the registration sticker matched him or the vehicle, Hoppenjans said during the plea hearing.

The value of the stolen merchandise was $8,000, Hoppenjans said.

Two search warrants of Eldredge’s home and garage recovered numerous items believed stolen, including power tools, hand tools, electronics and canceled checks and title for a vehicle that was not in Eldredge’s name.

Several pieces of merchandise were matched to those taken from a storage unit that had been broken into.

Vaughn Turley said he had received a $2,000 settlement from his insurance company for his stolen trailer but had to take out a loan to purchase a replacement. The trailer was found by the Perrysburg Township Police Department.

“I hope the defendant has maybe learned a lesson from this,” Turley said.

“While I have no doubt this case was motivated by his addiction, there’s something else there, too, with the way he thinks about his relationship with society and being law abiding,” Hoppenjans said.

Defense attorney Kent Sobran asked that the sentences for theft run concurrently with any other sentences.

“He has shown remorse,” Sobran said about Eldredge. He asked that Eldredge, at some point, be placed in the SEARCH program.

Eldredge apologized to his victims and people he has hurt through his irrational thinking. He said that using drugs led to him making bad decisions.

“I just want to ask you for a chance. I would be greatly in debt if you could see I’m sorry,” Eldredge said to the judge.

“You don’t seem to have responded well to past sanctions,” Kuhlman said. “You scared the crap out of everyone involved. I think a prison sentence is necessary.”

Kuhlman sentenced Eldredge to 36 months for escape and 12 months for grand theft of a motor vehicle. The 12 months will run concurrently to an undetermined jail sentence Eldredge is currently serving in Wyandot County, but consecutively to the sentence for escape.

Kuhlman also imposed a 12-month sentence for each of the receiving stolen property and theft charges, so be served concurrently with the Wyandot County sentence but consecutively to the escape.

Eldridge will spend 36 months in prison on these charges after he finishes his Wyandot County sentence.

He also must pay $1,969 in restitution to the theft victims and $250 to the woman whose vehicle he stole.