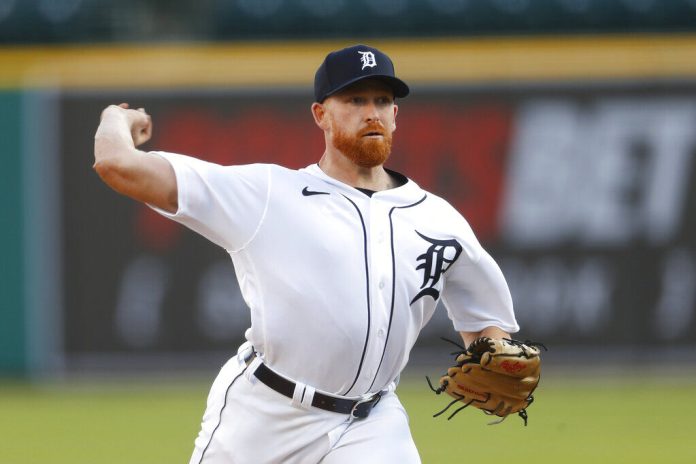 DETROIT (AP) — Spencer Turnbull and the Detroit bullpen combined on a three-hitter, Austin Romine and
Travis Demeritte each drove in two runs and the Tigers beat the Cincinnati Reds 7-2 Friday night.
Turnbull led the majors in losses last season as a rookie, going 3-17 and dropping his last 13 decisions.
The 27-year-old righty pitched five effective innings at Cincinnati last weekend in getting a
no-decision in his first start, then fared well in his second time against the Reds.
Turnbull (1-0) allowed two runs and three hits in six innings. He struck out six, walked one and didn’t
allow a hit until former Tigers teammate Nick Castellanos doubled leading off the fifth.
"Feels good," Turnbull said. "I think it’s been a minute since I got a W too, so it’s
extra sweet."
His last win had come in May 2019.
"I thought his fastball command was excellent tonight," said Romine, who caught Turnbull.
"It was tough for them to get the ground under them."
Detroit relievers Gregory Soto, Buck Farmer and Bryan Garcia retired nine consecutive batters in the
final three innings.
Luis Castillo (0-1) gave up five runs on eight hits in six-plus innings.
The Tigers scored twice in the fifth to take a 3-2 lead on Romine’s RBI double and Jacoby Jones’
run-scoring single. They added two in the seventh to chase Castillo on Romine’s RBI single and Nate
Jones’ wild pitch.
Demeritte hit a two-run double in the eighth. He had entered the game in the seventh as a pinch runner.

The Red took a 2-1 advantage in the fifth as Nick Senzel’s double and Tucker Barnhart’s single brought in
the runs.
Niko Goodrum’s sacrifice fly gave Detroit a 1-0 lead in the third.
TRAINER’S ROOM
Reds: Placed LHP Wade Miley on the injured list, retroactive to Tuesday, with a strained left groin.
Tigers: OF Cameron Maybin was placed on the injured list with a strained right quadriceps. He sustained
the injury while legging out an infield single in the ninth inning of Thursday night’s 5-3 loss to the
Kansas City Royals. Detroit recalled Demeritte, an outfielder, from its satellite campus in Toledo to
take Maybin’s place. Demeritte had a groin injury during much of summer camp.
UP NEXT
Trevor Bauer (0-0, 1.42) goes for the Reds against Michael Fulmer (0-0, 13.50), in the second game of the
series on Saturday at 1:10 p.m. Fulmer is making his second start since returning from Tommy John
surgery. Fulmer’s first start was also against Cincinnati.
___
More AP MLB: https://apnews.com/MLB and https://twitter.com/AP_Sports