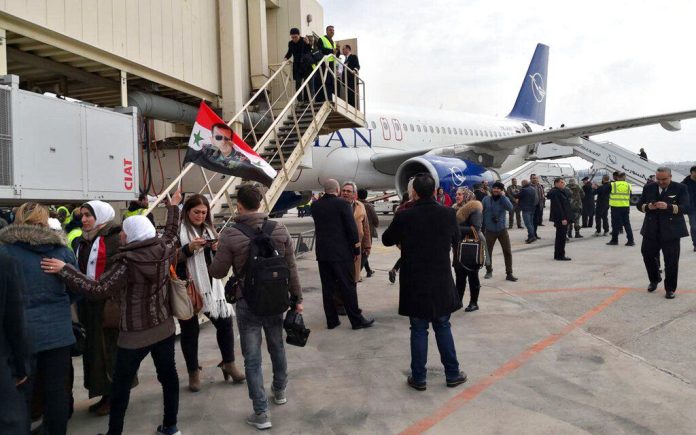 ALEPPO, Syria (AP) — A Syrian passenger jet landed in Aleppo on Wednesday from Damascus as domestic
flights resumed between Syria’s two largest cities for the first time since 2012, while the government
continued bombarding several rebel-held towns and villages nearby.
The flight carrying Syrian officials and journalists was an important symbol that President Bashar
Assad’s government, with Russian military support, has consolidated its control over the northwestern
province of Aleppo and also seized the last segments of the strategic M5 highway linking Aleppo to
Damascus. The motorway, under repair, is scheduled to reopen in coming days for the first time in eight
years.
For weeks, government forces have been conducting a crushing military campaign to recapture the Aleppo
countryside and parts of neighboring Idlib province, the last rebel-held areas in the country. The swift
advances on multiple fronts have triggered the largest single wave of displacement in the nine-year
civil war, with nearly 1 million people driven from their homes toward the Turkish border.
The suffering has been compounded by a bitter winter with freezing temperatures, leading to a number of
deaths among people sheltering under plastic tents, in open fields and under trees. The advocacy group
Save the Children reported Tuesday that seven children, including a 7-month-old, have died in cold and
"horrific living conditions" in displacement camps in northwestern Syria over recent weeks.

The U.N. puts the number of civilians displaced since Dec. 1 at more than 900,000 — most of them women
and children. Humanitarian chief Mark Lowcock said at least 100 civilians, 35 of them children, were
killed so far in February by airstrikes and shelling. He said aid efforts are "overwhelmed."

In New York, the U.N.’s Syria envoy, Geir Pedersen, expressed alarm at the "rapid
deterioration" in Idlib, and he appealed for a cease-fire.
"Young children are dying from cold. The potential for more displacement and even more catastrophic
human suffering is apparent as an increasing number of people are hemmed into an ever-shrinking
space," he told a Security Council meeting on Syria.
Satellite images showed the staggering scale of the displacement, concentrated within a small space in
Idlib province near the border with Turkey.
The images from Colorado-based Maxar Technologies show a huge number of tents and shelters near Kafaldin
and Deir Hassan. Images from the same area a year ago show the rapid expansion of the informal camps, as
hundreds of thousands of people scrambled to escape the onslaught. The images also show tents near the
edge of a nearby quarry.
Airstrikes and shelling were reported Wednesday on several rebel-held areas, mostly near the towns of
Daret Azzeh and Atareb. The Britain-based Syrian Observatory for Human Rights, an opposition war
monitoring group, reported more than 120 airstrikes on Tuesday alone.
The Syrian Civil Defense, an activist group, reported that four civilians were killed and 18 were wounded
in Tuesday’s bombardment on several parts of Idlib.
Rida Haj Bakri was among those fleeing Daret Azzeh, most of them to the areas of Afrin and Azaz. He and
his family had fled to Daret Azzeh from Maaret el-Numan only about a month ago.
"The roads are filled with displaced people fleeing. … There is no water, no bread, I don’t have
the price of diapers," he said.
"I don’t know — where do we go from here?" he asked as he and his relatives packed their meager
belongings onto a pickup truck.
Although Russia and Turkey support opposing sides in the conflict, the offensive has strained cooperation
between Moscow and Ankara and led to direct clashes between Syrian and Turkish troops.
Turkey and Russia have closely coordinated their moves in recent years in Idlib province. A truce reached
between the two countries collapsed in late 2019, leading to the current Russian-backed offensive.
Turkey arms and trains the Syrian opposition and has sent thousands of troops and military reinforcements
into Idlib in recent weeks to try to stem the Syrian government advance. That has led to rare clashes
between Turkish and Syrian troops, with deaths on both sides.
Turkish President Recep Tayyip Erdogan on Wednesday called for Assad’s forces to retreat from Idlib or
face an "imminent" Turkish intervention.
"We are delivering our final warnings. We have not reached the desired results as yet," Erdogan
said, addressing lawmakers from his ruling party. "The operation in Idlib is a matter of time. We
could enter (Idlib) suddenly one night."
His comments came a day after a top Turkish official said talks in Moscow between Russian and Turkish
representatives to reduce tensions in Idlib did not yield a "satisfactory result" for Ankara.
The official said however, that the sides agreed to continue discussions.
Russian officials said they held Turkey responsible for the collapse of the cease-fire deal that was
reached during talks in Sochi, Russia, saying Ankara had not held up its end of the deal to rein in
militants, who continued attacking Syrian and Russian targets.
"We were satisfied with the agreements reached a year ago in Sochi," Kremlin spokesman Dmitry
Peskov said.
"We absolutely stopped being satisfied when militias and terrorists in Idlib started their attacks
on the Syrian military and Russian military objects. That’s where our satisfaction ended."
He said the Kremlin intends to use its "working contacts" with Turkey to try to prevent further
escalation.
The commercial Syrian Air flight landed in Aleppo after a 40-minute flight from Damascus and was welcomed
by a military band on the tarmac. Syrian warplanes flew low overhead in a show of force and celebration.
Syrian Tourism Minister Rami Radwan Martini and Transport Minister Ali Hammoud had earlier opened the
airport for business.
Hammoud called the opening of the airport is a "great joy" for Syrians and a "dream"
for the ministry. It has been closed since 2012 due to fighting after Aleppo fell into rebel hands.
The Syrian army drove the rebels out of Aleppo in December 2016, after a crushing siege and bombardment
campaign, with help from Russia and Iran. The airport opened briefly in 2017 but closed again due to
security concerns.
In southern Syria, meanwhile, two Oxfam workers were killed by armed attackers in Daraa province, said
Mark Lowcock, the U.N.’s humanitarian affairs chief.
Wissam Hazim, southern hub staff safety officer for the charity, and driver Adel Al-Halabi were killed
when their vehicle was attacked by an armed group, Oxfam said. An Oxfam volunteer also was injured, it
said in a statement.
Daraa province is controlled by Syrian government forces, although there have been reports of rebel
violence.
___
Karam reported from Beirut. Associated Press writers Suzan Fraser in Ankara, Turkey, Bassem Mroue in
Beirut and Daria Litvinova in Moscow contributed.
___
This story has been corrected to show that Syria’s tourism minister is Radwan Martini, not Bishr
al-Yazigi.