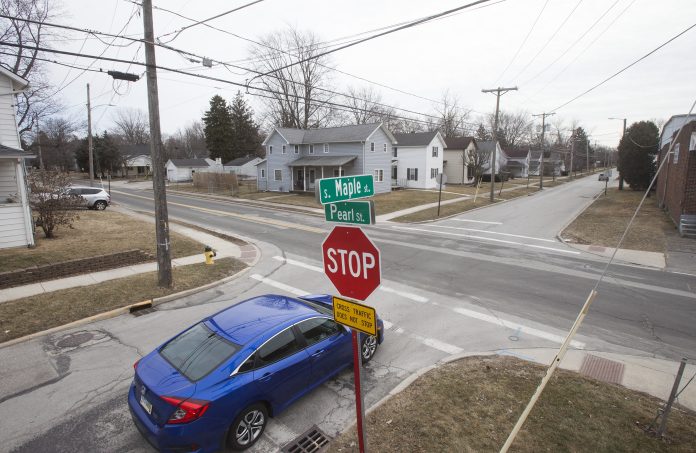 Two intersection studies in Bowling Green do not meet the criteria for installation of multi-way stop
sign control, but the addition of robots and pandemic impacts on traffic patterns are being considered
by the Bowling Green Traffic Commission.
“This has been a very unusual year. I mean nothing has been normal. Traffic hasn’t been normal,
pedestrian traffic and vehicle traffic. We’ve had the introduction of the robots. That adds a little
twist to everything. I think it would behoove us to at least study this a little closer before we make
any decisions,” said commission member Bill Moorman, who is also the fire chief.
Decisions were tabled because the Wednesday meeting lacked a quorum of traffic commission members with
only four of nine members present. There were also no members of the public to make comments.
Studies of both the Pearl and South Maple streets intersection and the Thurstin and East Merry avenues
intersection failed to meet the traffic volume criteria for installation of multi-way stop sign control.

The requirement is an average of 300 vehicles per hour on the major street and 200 average vehicles per
hour for the minor, for the same eight hours of an average day. Pearl and South Maple were monitored
from Dec. 10-13 and had the following traffic: Pearl St. West 3,240 vehicles, and East 2,770, S. Maple
St. South 2,630 and North 1,670.
“It didn’t come anywhere close for the eight hours,” said Public Works Director Brian Craft, who
presented the reports.
Thurstin had a total of 3,001 vehicles and Merry had 892.
“There were some interesting things in here that I did note,” Moorman said. “One in particular, that you
pointed out, is this situation would not be eliminated by all-way stop control. That was that accident.
It was an unfortunate accident, and I think that is a very important piece of information.”
In that 2018 injury incident a pedestrian was crossing Thurstin Street eastbound and was struck by a
westbound vehicle turning south.
Poggemeyer Design Group conducted both studies. The Thurstin/Merry study took place Sept. 15. Several
changes have been made to the intersection since the accident. At all four approaches the intersection
has been upgraded with high visibility crosswalks.
The report did state that “While Thurstin Street pedestrian crossings would likely benefit from stopping
all traffic, there is no clear pedestrian conflict which would warrant multi-way stop control on its
own.”
It also mentioned that the recent additions of bicycle sharrow markings and delivery robots should be
monitored.
“I was driving right there in that area … earlier today, and one of those stupid robots shot off right
directly in front of traffic, a car had to slam on its brakes to avoid hitting it,” said member Rick
Beaverson. “I think we need to know what these robots are going to be doing.”
Moorman recommended that the police look into how many accidents have happened with the robots.
“It would be a little bit of interesting information if you could have maybe the police division Chief
Hetrick look into that to see how many accidents have involved these robots and to see if they have been
adhering to all the rules and regulations that were set forth for them,” said Moorman.
The report also called the pedestrian traffic “significant,” with 296 people counted.
“I think based on the COVID it would be a good idea to wait. We don’t have the number of students on
campus and there probably aren’t as many students using the road. Let’s wait until we get a true
number,” said member Roger Mazarella.
“This is a very difficult time for everybody. I know everyone is extremely busy. I want to make sure
everyone gets an opportunity to read these reports. I hate to make a decision on these reports without
everybody knowing the facts,” Moorman said.