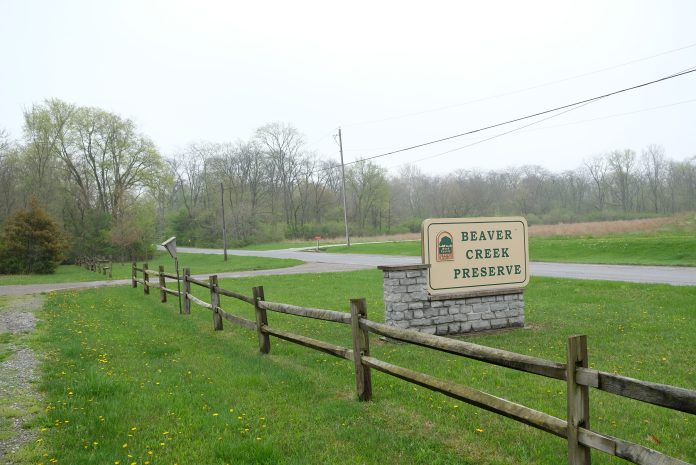 GRAND RAPIDS – The Wood County Park District will soon be able to process its own logs into lumber.
At Tuesday’s park board meeting, held at Beaver Creek Preserve, members approved the purchase of a
portable sawmill for $5,695 from Wood-Mizer LLC.
“We’re felling trees all the time,” said Jeff Baney, assistant district director, adding they took down
24 trees on the Slippery Elm Trail two weeks ago.
A sawmill will be “extremely beneficial to us,” said Neil A. Munger, park district director.
A lot of downed trees in the parks could be milled for lumber, he explained.
The sawmill can handle logs up to 28 inches in diameter and 11 feet long and produce up to 240 board feet
per hour, according to the specs on the Wood-Mizer website.
The sawmill could be used right away at Carter Historical Farm, including for construction next year of a
building to replace one torn down that will house a lot of different farm functions, including a
blacksmith shop.
“We would be able to pretty much completely construct that building out of lumber from the farm,” Munger
said. “Which would be significant in the fact that that’s what they would have done – used the lumber at
hand.
“It also saves us a lot of money,” he added.
The recent construction of the corn barn cost $15,000 in hardwood, Baney said.
This year’s budget does not include the sawmill, but Munger said $10,000 in the operations budget was
saved in the purchase of a half-ton pickup truck.
“We have more than enough left over from that to cover the cost of this.”
The district also is talking about putting in a plank road at the farm, where wetlands are being
reintroduced. To get to some of the areas in the wetlands, walking through a lot of water is necessary.

“We thought that would be the perfect place to put in a demonstration of what a plank road is,” Munger
said.
It can be completed using wood that is there, instead of purchasing any.
With a wood jointer and planer already on hand, the sawmills also can be used to cut wood for finishing
work.
“There are a number of things we can do with this,” he said, adding it would probably pay for itself in a
year.
The board also is seeking a historic agricultural specialist, a new full-time position, for Carter
Historic Farm.
“Not only will it help the farm, it will take a lot of pressure off of our other departments,” Munger
said. “We really can’t move forward with any of the other planned activities out there until we have
this person in place. We’re pretty much maxed out with what we can do out there.”
With the help of Corinne Gordon, historic farm specialist, and Jim Witter, program coordinator, “It’s
exciting to see where they’re going, where we are now and where we came from. It’s come a long way; we
have a long way to go yet,” Munger said.
The position is the key part of the next phase at the historic farm, which is farming, said Baney.
While the salary is not yet set, comparisons will be made with other counties, including Delaware County,
which have a similar position.
“I just want to make sure we’re at least within the higher ranks so we could get some good applicants,”
said board member Bill Cameron.
The specialist will plan and operate the agricultural component of the historical farm and programming,
including the implementation of the livestock management program. Interested parties need to be able to
operate equipment including a chain saw, cultivator and tractor.
During the meeting, the board also:
• Discussed renewal of its insurance. Board President Denny Parish asked if there had been any claims
made in the past year.
Munger said on Memorial Day weekend, power was out at Cedar Creeks Preserve. A transformer blew, creating
a surge in the building. A crew member arrived to find a hand dryer smoking.
“If he had not got there when he did, we probably would have lost the building,” he said.
Both hand dryers were lost, as was the video system and the grinder pump.
Baney said if the grinder pump can be repaired, it will cost $2,800. If it can’t, it will cost $4,000 to
replace it.
Parish asked for a list of claims made over the last five years.
• Received a copy of the new park police department policy manual and was asked to review it.
• Received a copy of the draft 2020 statutory budget, which includes two new positions. The full-time
position is the historic agricultural specialist; the part-time stewardship position will do landscaping
around all the different parks. The final copy will be available at the next meeting.
• Reviewed security measures at the Mercer Road headquarters.
“I would just like to know it is as secure as it could be without closing it to the public,” Cameron said
when asking for a study to be done for the security of the building.
Bullet-resistant glass has been added to the lobby area, where a panic button also has been added. All
entrances except the main entrance are always locked, with a key or code necessary for entry.
• Learned the hold-up on the cleanup at Buttonwood Park has been the waiting for the necessary machinery
to aid in the work.
“As soon as we get that piece of equipment in, we’re going to start scheduling cleanup up there,” Munger
said. Burning the debris is not allowed, so it will need to be hauled out.
Once cleanup is done, they will start talking about the next step for usage of the park, “how to rebuild,
what to rebuild.”
The park was closed this spring after being damaged by ice after a hard freeze in late January, followed
by a rapid thaw and “regular” cold winter weather.