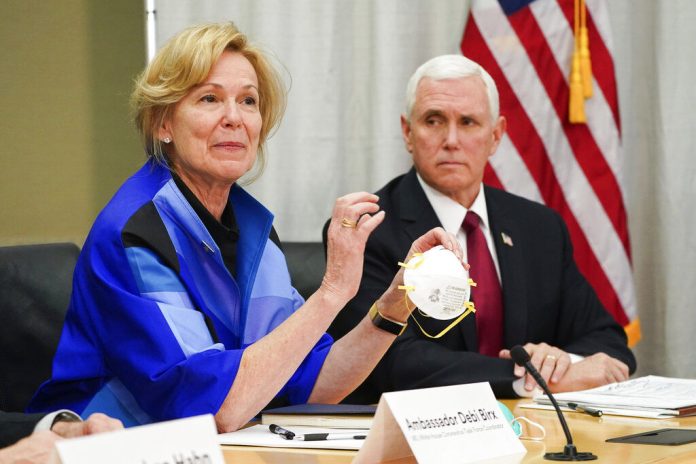 WASHINGTON (AP) — Vice President Mike Pence was self-isolating Sunday after an aide tested positive for
the coronavirus last week, joining three of the nation’s top scientists in taking protective steps after
possible exposure.
An administration official said Pence was voluntarily keeping his distance from other people in line with
guidance from the Centers for Disease Control and Prevention. He has repeatedly tested negative for
COVID-19 since his exposure but was following the advice of medical officials.
"Vice President Pence will continue to follow the advice of the White House Medical Unit and is not
in quarantine," spokesman Devin O’Malley said Sunday. "Additionally, Vice President Pence has
tested negative every single day and plans to be at the White House tomorrow."
Pence has been at home since returning to Washington from a day trip to Iowa on Friday and did not appear
at President Donald Trump’s meeting with military leaders Saturday at the White House. Pence was
informed of the aide’s positive test shortly before departing for that trip.
An official initially said Pence planned to continue working from home, before Pence’s office clarified
that he planned to work from the White House on Monday. It was not immediately clear how Pence’s steps
to self-isolate would impact his professional or public engagements.
Pence has led the White House coronavirus task force for more than two months. Top officials who have
gone into quarantine because of exposure to a person at the White House who tested positive for the
virus are Dr. Anthony Fauci, the director of the National Institute of Allergy and Infectious Diseases;
Dr. Robert Redfield, director of the CDC; and the commissioner of the Food and Drug Administration, Dr.
Stephen Hahn.
Pence’s press secretary, Katie Miller, tested positive for the coronavirus on Friday, making her the
second person who works at the White House complex known to test positive for the virus this week.
A military service member who acts as a valet to the president tested positive on Thursday, the first
known instance where a person in close proximity to the president at the White House had tested
positive.
After Miller was identified as having tested positive, Trump said he was "not worried" about
the virus spreading in the White House. Nonetheless, officials said they were stepping up safety
protocols for the complex.
The three other task force members have indicated varying plans for dealing with their exposure. None has
announced testing positive for the virus and, taking into account what has been described as limited
exposure to the infected person, are considered at relatively low risk for infection.
Fauci’s institute said he was "taking appropriate precautions" to mitigate the risk to others
while still carrying out his duties, teleworking from home but willing to go to the White House if
called. Officials said both Redfield and Hahn will be self-quarantining for two weeks.
The three officials were expected to testify before a Senate committee on Tuesday, most likely by
videoconference.