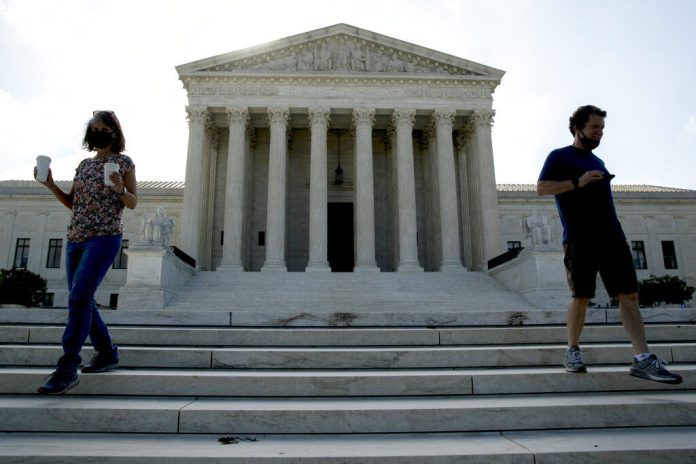 WASHINGTON (AP) — The Supreme Court ruled Thursday that a large chunk of eastern Oklahoma remains an
American Indian reservation, a decision that state and federal officials have warned could throw
Oklahoma into chaos.
The court’s 5-4 decision, written by Justice Neil Gorsuch, means that Oklahoma prosecutors lack the
authority to pursue criminal cases against American Indian defendants in parts of Oklahoma that include
most of Tulsa, the state’s second-largest city.
"Today we are asked whether the land these treaties promised remains an Indian reservation for
purposes of federal criminal law. Because Congress has not said otherwise, we hold the government to its
word," Gorsuch wrote in a decision joined by the court’s liberal members.
The court’s ruling casts doubt on hundreds of convictions won by local prosecutors. But Gorsuch suggested
optimism.
"In reaching our conclusion about what the law demands of us today, we do not pretend to foretell
the future and we proceed well aware of the potential for cost and conflict around jurisdictional
boundaries, especially ones that have gone unappreciated for so long. But it is unclear why pessimism
should rule the day. With the passage of time, Oklahoma and its Tribes have proven they can work
successfully together as partners," he wrote.
Oklahoma’s three U.S. attorneys quickly released a joint statement expressing confidence that
"tribal, state, local and federal law enforcement will work together to continue providing
exceptional public safety" under the ruling.
Jonodev Chaudhuri, ambassador of the Muscogee (Creek) Nation and a former chief justice of the tribe’s
Supreme Court, said the state’s argument that such a ruling would cause legal havoc in the state was
overblown.
"All the sky-is-falling narratives were dubious at best," Chaudhuri said. "This would only
apply to a small subset of Native Americans committing crimes within the boundaries.
"This case didn’t change ownership of any land. It didn’t impact the prosecutions of non-Indians in
any way. All it did was bring clarity to jurisdictional questions regarding the border, and it enhanced
the Creek Nation’s ability as a sovereign nation to work with other sovereign interests to protect
people and to work in common interests."
Forrest Tahdooahnippah, a Comanche Nation citizen and attorney who specializes in tribal law, said the
ruling’s short-term implications are largely confined to the criminal context and that serious felonies
committed by Native Americans in parts of eastern Oklahoma will be subject to federal jurisdiction.
"In the long term, outside of the criminal context, there may be some minor changes in civil
law," he said. "The majority opinion points out assistance with Homeland Security, historical
preservation, schools, highways, clinics, housing, and nutrition programs, as possible changes. The
Creek Nation will also have greater jurisdiction over child welfare cases involving tribal
members."
The case, which was argued by telephone in May because of the coronavirus pandemic, revolved around an
appeal by an American Indian who claimed that state courts had no authority to try him for a crime
committed on reservation land that belongs to the Muscogee (Creek) Nation.
The reservation once encompassed 3 million acres (12,100 square kilometers), including most of Tulsa.
The Supreme Court, with eight justices taking part, failed to reach a decision last term when it reviewed
a federal appeals court ruling in a separate case that threw out a state murder conviction and death
sentence. In that case, the appeals court said the crime occurred on land assigned to the tribe before
Oklahoma became a state and Congress never clearly eliminated the Creek Nation reservation it created in
1866.
The case the justices decided Thursday involved 71-year-old Jimcy McGirt, who is serving a 500-year
prison sentence for molesting a child. Oklahoma state courts rejected his argument that his case does
not belong in Oklahoma state courts and that federal prosecutors should instead handle his case.
McGirt could potentially be retried in federal court, as could Patrick Murphy, who was convicted of
killing a fellow tribe member in 1999 and sentenced to death. But Murphy would not face the death
penalty in federal court for a crime in which prosecutors said he mutilated the victim and left him to
bleed to death on the side of a country road about 80 miles (130 kilometers) southeast of Tulsa.
Following the ruling, the state of Oklahoma issued a joint statement with the Muscogee (Creek), Cherokee,
Chickasaw, Choctaw and Seminole nations in which they vowed to work together on an agreement to address
any unresolved jurisdictional issues raised by the decision.
"The Nations and the State are committed to ensuring that Jimcy McGirt, Patrick Murphy, and all
other offenders face justice for the crimes for which they are accused," the statement read.
"We have a shared commitment to maintaining public safety and long-term economic prosperity for the
Nations and Oklahoma."
___
Murphy reported from Oklahoma City.