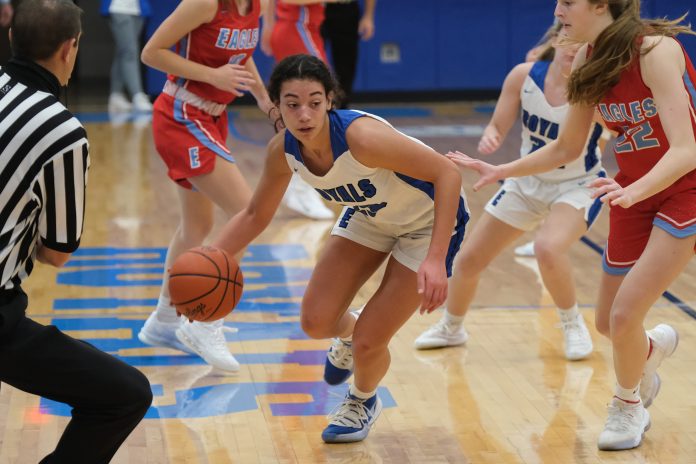 BLOOMDALE – Only a junior, Elmwood’s Brooklyn Thrash has already scored over 1,000 points in her high
school basketball career.
She is one of seven Royals to break the 1,000 points barrier in their prep careers. Thrash is closing in
during every game to surpass Tricia Myers, a 1988 graduate. Myers scored a school record 1,433 points
while having the 3-point basket only during her senior year.
Thrash said to reach 1,000 points this season was a goal when she started playing basketball.
“I have reached that and now my next goal is to get higher (and pass Myers),” Thrash said.
The 6-foot-0 Thrash got started with basketball while she was in grade school.
“It was kind of weird because I was starting to do cheers in kindergarten and elementary, and my dad said
‘you should do basketball,’” Thrash said. “I started playing basketball in fifth or sixth grade. That’s
where it all started and it goes on from there. It just came easy to me. It’s harder now. I just have to
be smarter in what I do.
“It’s not just something to do. It’s something that I enjoy doing,” Thrash continued. “It’s the
competition and playing against other people and just wanting to win. It’s fun to play and I just like
that. I’m good at it and keep winning. It’s fun to be with the girls and just have fun.”
Doug Reynolds, the Elmwood girls’ coach who has over 400 victories in his career, knew from the start
that Thrash was a special player.
“Brooklyn is an extremely gifted athlete. These kind of athletes don’t come along that often. She is so
versatile on the court. She can play any positions, which isn’t easy for most players,” Reynolds said.

“I always expected her to play like a senior when she was a freshman,” Reynolds continued. “I put a lot
on her shoulders then and I obviously do this year.”
This year Reynolds has moved Thrash to point-guard and she is very comfortable there. She is averaging
almost five assists and eight steals per game.
“What makes Brooklyn so good is her ability to see what is going to happen before it does,” Reynolds
said. “Her ability to get steals when you wouldn’t think she could is tremendous.
“She has always been a good passer, but she is taking it to a new level this year.
“Teams are doubling her and with her ability to see the open person, it is hard for teams to be
successful,” Reynolds added.
Thrash also continues scoring, including a 42-point performance in an 89-76 overtime win over Eastwood
earlier this season.
Thrash plans to play college basketball, and she said that Bowling Green has been in contact with her.

“I just see other really good players. I just want to be like them and achieve all the goals that they
have,” Thrash said.
She has played on One Nation, an AAU team, in Michigan to improve her game and to get experience for
colleges to see her play.
“The practices were way harder than what I do in high school. It kept my stamina up and kept me running
and doing all these drills and help me be stronger with defense and everything,” Thrash said.
“Brooklyn is a Division 1 player,” Reynolds said. “She wants to get better and plays all summer to just
do that. Brooklyn has high aspirations on when her high school career is over. The sky is the limit for
her, and my job as a coach is to help her reach it.”
In addition to basketball, Thrash also plays volleyball and runs track for the Royals.
“Maybe not running, but I like both of them,” Thrash said.
Thrash also has a great deal of support from her parents.
“They always encourage me to do better on the court and off the court,” Thrash said about her parents, JR
and Jodi. Jodi did play basketball for the Royals, but JR, who is 6-4, did not.
“They are huge supporters and always have been doing whatever for her to better her future in
basketball,” Reynolds said.