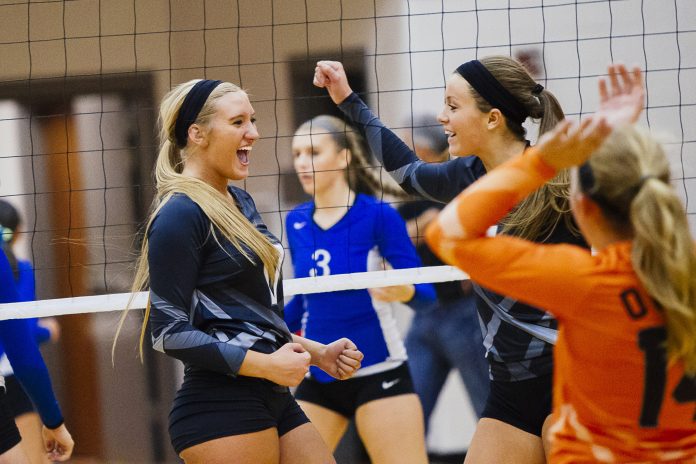 TONTOGANY – Morgan Smoyer led the Otsego High School volleyball team to a 25-19, 25-19, 25-18 sweep over
Elmwood Thursday night. With the victory, the Knights improved to 9-0 in the Northern Buckeye Conference
while the Royals dropped to 6-4. PHOTO GALLERY
Smoyer, a junior, finished with 13 kills and senior Abby Hesselschwardt led Otsego, 11-3 overall, with 15
kills. Though Hesselschwardt led in the category, Smoyer made plays all over the court for the entire
match.
"She did do a beautiful job," Otsego head coach Cheryl Jones said of Smoyer. "I hope that
(tonight) helped her get the confidence to know that she can just smoke it. She was a force to be
reckoned with."
"It felt really good. I was feeling it," Smoyer said about her night. "I thought we played
really well and we worked together really well."
Along with Smoyer and Hesselschwardt, senior Kylie Asmus was a force to be reckoned with, totaling seven
aces to go with her 12 digs. Mac Varner finished with 35 assists for the Knights.
Jones called Asmus a "Hoover vacuum sweeper" with the plays she is able to make in her first
season as libero.
"Kylie is a very hard-working young lady," Jones said. "From day one, I did not want to
lose her. I knew she had an incredible work ethic."
Though Otsego never allowed more than 20 points in each set, the match was full of runs on either side of
the net. At the end of each set, Elmwood challenged Otsego to the wire, forcing the Knights to earn each
victory.
Elmwood head coach Penny Rayle said her team, now 11-6 overall, was able to make those runs by focusing
on getting a kill from each play.
Senior Jasmine Marsh dominated on Elmwood’s side of the net, tallying 14 kills, 10 digs and three aces.
It was Marsh’s kills that ended several Otsego runs and allowed Elmwood to begin spurts of its own in
each match. "(Marsh) and Ashley Veryser run our team, that’s for sure," Rayle said. "If
we give them the ball, they will do anything and everything. I can always count on them. They’re just
great athletes to have."
Veryser added 10 kills for the Royals, while senior Jennah Wilson finished with 20 assists. Junior
Lindsay George finished with 11 digs.
Jones said Elmwood out-hustled her team, but Rayle said the Royals could take away a lot from this match.

"I think that once we get a couple of bad plays, we kind of get down and get really
discouraged," Rayle said of her young team.
Rayle said her team had a difficult time defending Otsego’s offense throughout the match. The team’s
strategy was to speed up its blocks to defend Smoyer and company.
"We had a hard time adjusting (to Otsego’s offense). They were hitting around us, over us. They’re
good, they’re experienced, they’re athletes. They’ve got it."
Jones said she was pleased with her team’s victory against what she considers a tough opponent.
"Any win is a good win," she said. "We knew that they’re a good team. It’s a crazy game
that, at any time, somebody can knock another team off, so we knew that we needed to be focused and get
down to business."