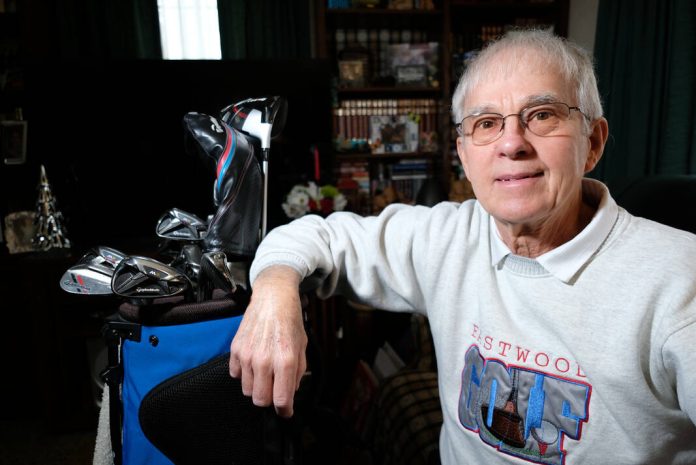 LIME CITY — Eastwood golf coach Mike Gardner lives next door to the former Tanglewood Golf Course in Dowling and worked there for 60 years until its closing in fall 2020. There might be a reason for that.

The passion for golf comes from his father, the late Dallas Gardner, a former Eastwood superintendent who was a charter member at Tanglewood and a three-sport athlete at Ashland University. Dallas was a multiple course champion at Tanglewood and had six holes-in-one during his lifetime.

“Golf is a passion for him, ever since I can remember,” Mike said. “He’s done other things, but as far as his activity as a participant, that’s his passion. He’s the one who got me started, hitting around in the backyard.”

Mike, who will retire this year after serving as Eastwood’s head boys golf coach for over a half century (51 years) said he started golfing at age 7 when the family moved into the Eastwood district.

“We had a golf course at our first house on Krotzer Avenue in Luckey,” Mike said. “There was a regular bent grass green from whoever lived there before we did. We didn’t keep it up as a bent grass green because that takes a lot of extra things, but we did mow it short, and I set up a golf course.

“We had a pretty big yard to set up a golf course within our property, and to make sure we had a chance to make some shorter putts I used tinsnips and scissors up near the hole to cut the grass even a few inches out from the hole.”

During his five decades-plus coaching career, Gardner coached both of his brothers, Randy and Gary, and his sons Bryan and Chris. Chris is now the head golf professional at Bluestone Country Club near Philadelphia.

Last summer, Chris organized a group of 16 golfers, most of them members at Bluestone, but included Randy, Gary, and Bryan for a trip to Scotland, where three members of the group, including Mike, were able to play St. Andrew’s the week before the British Open.

“We also played Carnoustie and some of the nicest courses in Scotland. That was neat,” Mike said.

About five years ago, Mike, family and friends traveled to Northern Ireland for another golf trip. Plus, when they get the chance, they make the trip to the Memorial in Dublin, Ohio. In 2010, Chris invited Mike to travel with him to the Masters in Augusta, Georgia.

“That was amazing because you have to do that at least once in your life, but now that I’ve done it, I kind of would like to do it again,” Mike said.

“One of my most thrilling moments was at the Masters, but it was on Wednesday when they have the par-three contest on the little course, and we went over early and got a standing position right along the No. 9 ropes — it is just a little nine-hole course,” Mike said.

“(Jack) Nicholas, (Arnold) Palmer and (Gary) Player played together in that, as they did sometimes, and they all walked right past us. I could have reached out and grabbed them — that is how close they were, as they were coming down the path to go to the green.”

Coaching golf for over 50 years was not difficult for Gardner because he loved what he did. However, he coached for other reasons.

Gardner took pride in making sure his players “always play with proper etiquette and a good knowledge of the rules,” not just while in high school, but maintaining that standard after graduation.

“That was our main goal every year,” he said. “We never went totally undefeated for any season counting dual matches and tournaments, but we had some years where I thought we went undefeated in that respect. They don’t measure that, but I did.

“Another reward is to watch those guys after they graduate, whether its two years, 10 years, 20 years, whatever, and they still have a good knowledge of the rules and use proper etiquette on the course.

Gardner has served on the state golf coaches’ executive committee since 2003, was president of the Northwest District Golf Coaches Association in the early 1980s and has been a rules official at the state tournament since 2011.

His induction into the Ohio High School Golf Coaches Hall of Fame in 1992 was already, by then, a no-brainer. He received the Toledo District Golf Association’s prestigious Burt Silverman Memorial Award in 2016.

The 1999 team, which Gardner considers his best, did not qualify for state but went 18-1 in dual meets and 88-4 in tournaments with the top five players averaging 39.8 strokes per nine holes. He said no other team was under 40, but a couple teams finished at 40.2

His best individual finish at the state tournament was by Gary Michel, who placed fifth in 2005, and his best players included Josh Jaworski, whose 36.8 average in 1999 was tops in the state and still a school record, and Michel, whose 37.5 average was third in the state and second in school history.

“At the time of graduation I don’t think anyone else was as good as they were, but some other people got really good right after graduation as they went to college and played,” Gardner said.

Gardner takes pride in that the Eastwood golf program is one of only four programs in 39 years of the former Suburban Lakes League that never finished in the lower division of the standings (among programs playing at least 10 years). The others were Eastwood volleyball, Elmwood softball and Oak Harbor wrestling.

While a student at Eastwood, Gardner went to state in 1968 after shooting a 72 at the district tournament. He earned 13 varsity letters in high school, ­including five letters during his senior year.

He was the quarterback on the 1966 football team, which won Eastwood’s ­first league championship in football, and point guard on the 1966-67 basketball team that went 22-1 and also won a Northern Lakes League title.

He went on to become a member of Bowling Green State University’s Mid-American Conference championship golf team in 1972. He played three sports at BGSU — golf for two years, on the baseball team two years and he played basketball one year.

An inductee in the Eastwood’s Alumni Association’s Eagle Way Hall of Fame in 2020, he taught physical education at Eastwood for 41 years, taking over immediately after graduating from BGSU.

Gardner coached boys and girls basketball at nearly every level, including serving as Eastwood’s head boys coach from 1982-84, and he coached football also. He also kept the boys basketball scorebook for 39 years, since 1984-85, and plans to continue that role.

He’s not the only Eastwood golf coach retiring. John Cavendish is retiring as head girls golf coach after 24 years. Cavendish had one golfer, Alyssa Shimel, who won a Division II state championship in 2009. The three combined bring 98 years of coaching experience to Eastwood.

Gardner keeps fit, too. He has run in four marathons (Columbus, Cincinnati, New York City and Washington, D.C.) Another accomplisment is firing a 67 at Tanglewood when he was69 years old.