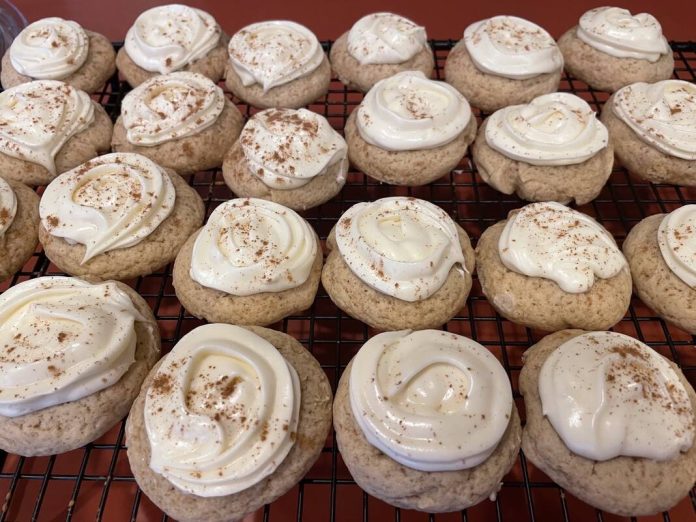 MILLBURY — When Cindy and Michael Brasington got married in 2017, she told him that she dreamed of having a big kitchen when they bought their first home.

The couple had just finished a two-month honeymoon, traversing 21 states and 21,000 miles. They were looking for a place to settle down and picked Lake Township, which was close to where Michael had grown up, in Holland.

He sent her a link to an unusual home that was for sale: The former Millbury school.

“He said ‘hear me out,’ joking that I always wanted a big kitchen, because I love to bake and cook,” Cindy said. 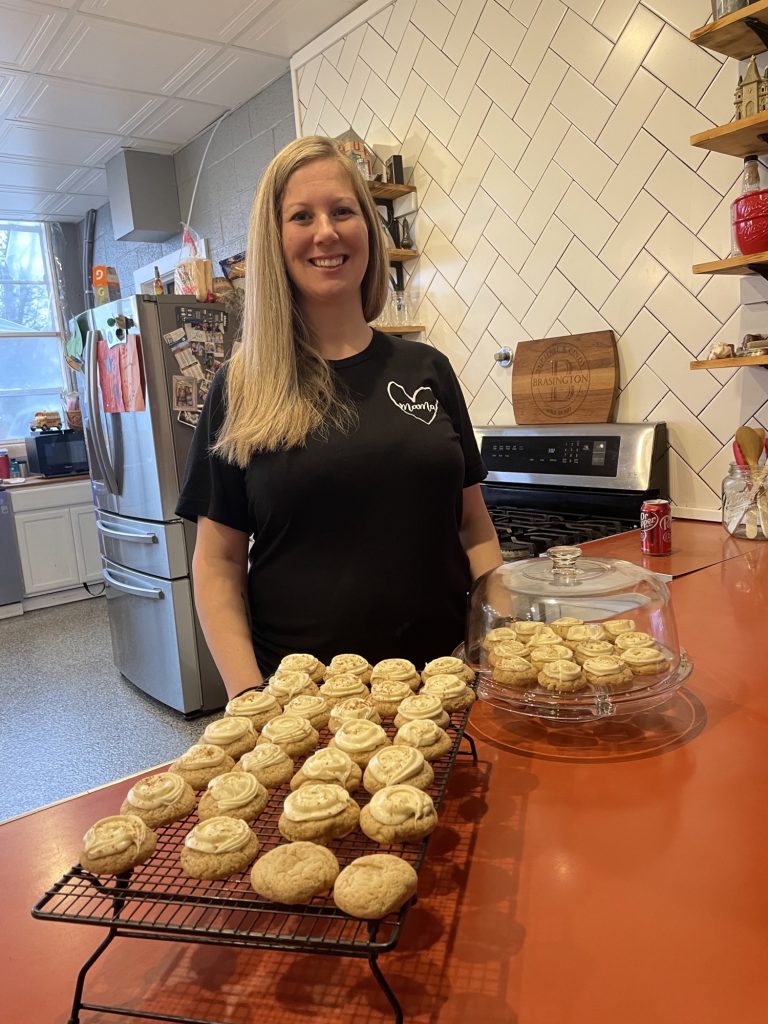 The kitchen was spectacularly large, with a door and window that overlooked the former gym/cafeteria, which turned into the family room.

In one corner of the kitchen, there’s usually a stack of Cinnamon Roll Cookies, which are a family favorite.

There’s bonus cinnamon — in the cookie and on top, in the cream cheese frosting.

“Whenever somebody sees a recipe for cream cheese, they say ‘Cindy will like that,’” she said.

“We have a case in the refrigerator right now,” said Cindy’s husband, Michael.

She found the Cinnamon Roll Cookies recipe online about 18 months ago. She added the cinnamon topping in the frosting, more flour and extra powdered sugar.

Cindy won the adult category for cookies with this recipe in the annual holiday baking competition at Random Acts, a gift and coffee shop in Walbridge.

Michael, who is a firefighter and EMT for Lake Township and Allen-Clay fire departments, is a frequent Random Acts customer and suggested she enter the recipe.

“He’s the one that got me in the cookie contest,” Cindy said.

In addition to baking, Cindy also cooks for the masses. Every Wednesday night in the summer, they invite Lake Township firefighters and EMTs to stop by for a meal. Cindy specializes in casseroles, while Michael likes to use a smoker.

“We cook a big meal and they just stop by when they can,” she said.

Their unusual home is fantastic for entertaining. One Thanksgiving, they had 17 people in the kitchen — comfortably — with some playing a bean bag game and others cooking.

“We had cornhole in the living room,” Michael said, adding that they also have the roll-out tables from the former cafeteria. “They fit like 20 people around them.”

Even though it was a former school, the home didn’t need a lot of remodeling, Cindy said.

“We bought it move-in ready,” she said.

They do not use the older part of the building, which was built in 1909. The newer part was constructed in 1959, Michael said.

Mix butter and sugar. Add eggs, one at a time, followed by the vanilla, and mix well. Add flour, baking powder cinnamon and salt. Mix until a firm dough forms.

Bake for 7-9 minutes. Chill for 30 minutes before frosting.

Beat together the cream cheese and butter until light and fluffy. Add the powdered sugar and beat until smooth. Add vanilla. Pipe onto cooled cookies. Sprinkle with cinnamon.

Cindy is from Missouri; she met Michael in South Carolina.

“He got me into traveling,” she said. “He loves to travel and he loves to drive everywhere.”

They relish making unusual stops while on the road.

On one trip, they got off the highway to see the giant Superman statue in Metropolis, Illinois. The entire family, which includes children Adelyn, 4; Ernest Jr., 3; Scarlett, who will be 2 in February; and Emma, who is due in May, will always stop at any Bucky’s on their route.

“It’s a gas station on steroids. We spend at least an hour in one every time,” Cindy said. “They have over 100 gas pumps and the inside has everything from your normal gas station food to fresh pulled pork sandwiches, deli sandwiches, fudge, homemade jerky, roasted peanuts. And it has kitchen decorations and clothing.

The family are parishioners at Calvary Church in Toledo, which Michael attended as a child.

“The friendship and the community is nice,” Cindy said about Lake Township living. “I love that we are in a country area, but close enough … to the bigger towns, because I’m a small-town person.”