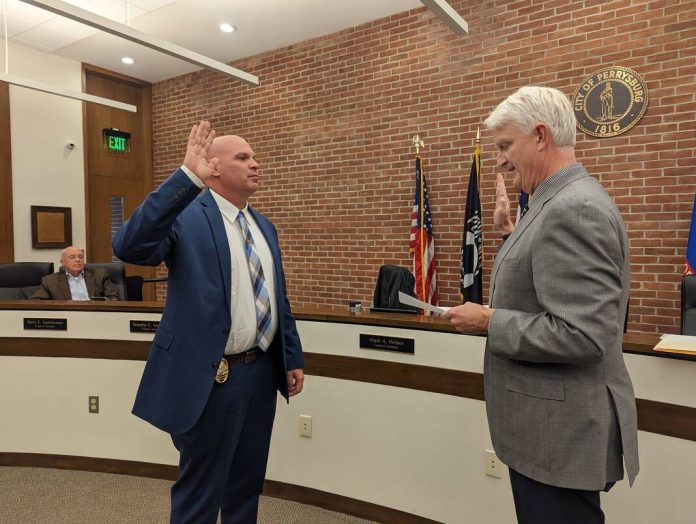 Mayor Tom Mackin made the recommendation and council voted 6-0 to confirm his appointment at Tuesday’s meeting. Jones was sworn in immediately after the vote.

“Perrysburg’s safety and security is always a top priority,” Mackin said. “The administration is regularly re-evaluating how this core function is performed. That process includes looking at ways to improve how we serve our citizens. Chief Jones has done a tremendous job serving as our police chief. Expanding his duties and responsibilities, will allow him to bring his knowledge and expertise to the entire breadth of safety issues. I look forward to working with him as the city’s safety director.”

Following his being sworn in, Jones explained some details of the job, how it has been handled in the past and his immediate plans.

He said that City Administrator Bridgette Kabat has also held the position of director of public safety, just as her predecessor John Alexander held both positions.

“It’s been kind of a dual role of the years. But as the city has grown, dividing up the duties was considered. When they looked at it, the safety forces consisted of half the city’s employees, so it kind of made sense to split that duty off,” Jones said. “I’ll oversee all the safety forces, police and fire.”

Jones will help to find his own replacement as police chief.

“For the time being, I will hold both positions, but we have a succession plan in place,” Jones said. “The idea is to work the succession plan and put a deputy chief in place. We still have that position on the books, but it’s not filled right now. If we can fill that position, it gives me time to work with that person.”

He said the job requires his time to be split equally between police and fire.

“Safety forces are what the public probably considers the most important parts of community government,” Jones.

Jones said that when he became police chief it took several years to completely understand the many facets of the job.

“I want to make sure that we’re not just throwing someone into the position and saying, ‘Go for it.’ But even after that I will be around to help that person, when they need it,” Jones said.

The first thing on Jones agenda is hiring a new fire chief. Deputy Chief Tom Granata has been leading the department.

Jones said that when Chief Rudy Ruiz retired at the end of September, the city had the Ohio Fire Chiefs Association assist with the hiring process. There were six candidates, and the field will be narrowed in January.