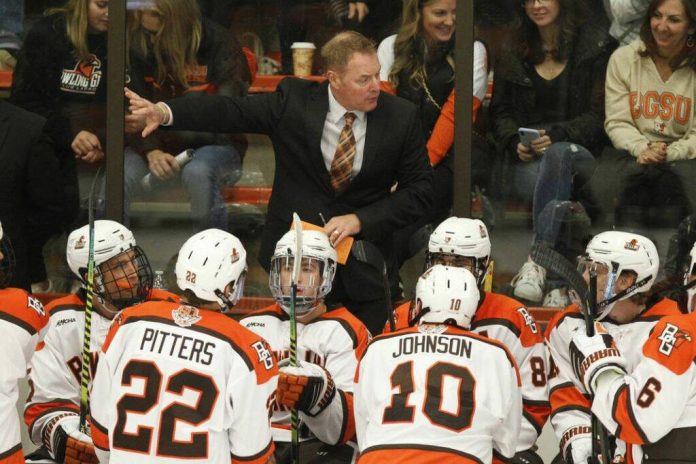 The Bowling Green State University hockey team is preparing for another Central Collegiate Hockey Association series at home this week against the Michigan Tech Huskies on Friday and Saturday.

With a 2-6 record this season and back-to-back losses against Minnesota State last weekend, BGSU coach Ty Eigner said the team needs to clean up some issues before heading into the weekend.

“We’re all focusing on some things we can correct,” Eigner said. “We tweaked some stuff a bit.”

Although the “tweaking” has been evident through the various line changes that BGSU has seen in the past few games, the biggest issue, according to Eigner, is having bodies in general.

“The biggest part is we’re not able to have healthy competition and practice the way we want to practice when we’re so short on bodies,” Eigner said. “It’s really hard to work on some things so consistently when you don’t have certain players.”

Despite the adversity, the team, including the veterans and the newbies, feel comfortable with each other and have great team chemistry, he said.

“There’s some guys that want to play better and are not happy with where they’re at individually, but they told us that they feel good about the group,” Eigner said.

This kind of team effort was seen in the series against the Mavericks last weekend, as the Falcons got to spend more time in their offensive zones and pushed through the No. 8 ranked team’s heavy defense.

Although both netminders Zack Rose and Christian Stoever have seen high save counts in multiple games, this tells a different story of the Falcons having difficulty in entering their offensive zone.

The Michigan Tech Huskies are a force to be reckoned with when it comes to their defensive prowess.

MTU senior Blake Pietila was named CCHA Goaltender of the Week on Monday due to his back-to-back shutouts and impressive .922 save percentage.

Eigner said that the key to getting pucks past Pietila is not being too fancy with the shot setup.

“Maybe we’re trying to get too perfect with it as opposed to just get a puck on the net and try to get some more opportunities,” Eigner said. “They defend well and he’s a good goalie, so the focus is going to be making sure we’re getting those shots.”

If the Falcons are able to improve on entering the opposition’s defensive zone and getting more shots on target, they can prove to be an offensively lethal team in the CCHA, he said.

Bowling Green has definitely had difficulties in their last few series, but this should not be time for panic or lost hope for the team, Eigner said.

The Falcons will drop the puck at the Slater Family Ice Arena at 7:07 p.m. Friday for the first game of the Michigan Tech home series.