WHITEHOUSE — Anthony Wayne’s defense had given up an average of 6.7 points per game heading into the Generals’ Northern Lakes League showdown against Perrysburg Friday.

That did not phase the Yellow Jackets as they scored five touchdowns and kicked a field goal behind 440 total offensive yards in defeating the previously unbeaten Generals, 38-28, at Schaller Memorial Stadium.

“It’s a very stout defense, so to be able to put up 38 it really shows how hard we’re working and how hard our offensive line was going at it with their defensive line on the front seven,” Perrysburg senior running back Connor Walendzak said.

“Ultimately, it was at the line of scrimmage that allowed us to score 38 points and mix it up when we had to. They are a scrappy team. We went back and forth for sure and there were a lot of momentum swings in a big game.

“To be able to come out and hold them, and to get the win and ultimately capitalize on offense, that was the big key for us,” continued Walendzak.

“It looked like we did everything we wanted, but they play good defense,” Perrysburg coach Dirk Conner said.

“Credit to our kids, and I don’t mean this to be arrogant. Our performance is not an indictment or anything to them over there, it is a compliment toward our kids on that side of the ball.”

Conner said having the ability to run or pass makes defenses think twice about how to handle the Jackets.

“It is just nice,” Conner said. “If anybody wants to take something away, we have other things we can go to.

“It was everybody. I can’t really rehash just what happened because I’m so pressed into, ‘What do we do next?’ But we had every kid on offense make a play today, and I’m proud of our kids for that and we are going to continue to do that.”

Takats said having multiple playmakers to throw to makes his job easier, even against a defense like AW’s.

“They have probably one of the — if not the best defense we are going to play all year,” Takats said. “So, our guys made plays. My job is easy, just give them the ball and, ‘See ya.’ I just stuck to coach Conner’s game plan.”

Takats threw a 21-yard TD pass to Walendzak and he had touchdown runs of 13 and four yards.

Perrysburg led 10-7 at halftime, thanks in part to a 41-yard field goal by Perrysburg kicker A.J. Bibbs, but in the third quarter each team put up two TDs on the scoreboard, turning it into more of a shootout.

“Yeah, a lot of points were put on the board. I think our O-line did a heck of a job,” Takats said. “They won the battle up front.

“On offense our playmakers made plays at crucial times, like that third and 10 — I think it was 31-21, and Andrew Hunt caught a 10-yard out route. That was big. That’s when the doors really shut.”

Conner credits Takats for taking over the game in the second half.

“I have complete faith in putting it in No. 5’s hands, and he delivered every single time.”

For AW, quarterback Cadence Carswell completed 10-of-20 passes for 118 yards, including a 63-yard TD pass to England Allen, and running back Joe Caswell ran for 236 yards on 24 carries and three TDs.

Defensively, Matt McEwen had an interception for Perrysburg and Avery Hunt had a quarterback sack.

Perrysburg improves to 6-1, but more importantly the Yellow Jackets take command in the NLL with a 4-0 record. AW falls to 6-1 and 3-1.

“That was an awesome win,” Conner said. “I’m proud for our kids and proud for our program. Anytime you win a rivalry game, you get to wear that shirt proudly now for the next 364 days until we do it again.

“We’ve got three weeks (left this season), but this was one you have to check off the list, obviously,” Conner said.

“That’s what we talked about — we don’t have enough dates on our NLL championship banner, and we need to add to it. It’s kind of special because it is the last year of the league (in the current format) so we want to send it out the right way.”

Walendzak believes the Perrysburg-AW game has become the premier rivalry in the NLL.

“We look at this game all season. This is our big game,” Walendzak said. “Anthony Wayne is a really good football team and a well-respected football program, so we love to get out and get to play teams like this and really test us.”

As a result, the game drew a huge crowd.

“I’m proud of our kids because it was awesome, and they appreciated it. It adds to it,” Conner said.

“We were here for warmups at 6 o’clock and this place was packed already. It’s two real good programs and we are going to do this every year with each other,” he said. “I don’t say it’s not like anything (we’ve faced before), but we know how to press forward and grind through it. I thought our guys really did and handled the emotion well tonight. To get to where our goals are, we need to continue to do that.”

(Sentinel-Tribune multi-media journalist J.D. Pooley did the interviews for this story.) 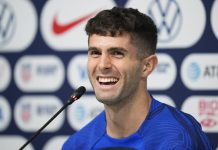 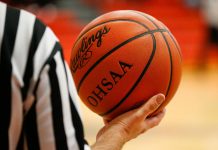 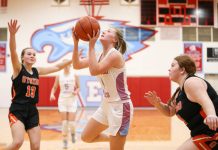