From campus buildings to student learning, a lot has changed at Bowling Green State University since its founding in 1910 as a state normal college.

Now, more than 100 years later, a piece of university history is making a return – of sorts – and creating a welcoming space for students, faculty, staff and the community to enjoy.

During its 100th Homecoming anniversary celebration, BGSU dedicated the new Alumni Gateway at the corner of Thurstin Avenue and Court Street on the western edge of campus.

The gateway – which resembles the original campus gateway that once stood in the same spot – showcases the university’s historic buildings with open walkways and sprawling green space. The Alumni Gateway also connects BGSU to the shops and restaurants in the city, which is ranked as one of America’s best college towns.

“The Alumni Gateway belongs to each of us, serving as a symbol that all are welcome on our campus who believe in our shared mission to do good,” BGSU President Rodney Rogers said. “It represents the thousands of BGSU alumni who have come before us, and the generations of future alumni who will walk this Gateway on their journey to create public good.”

Standing in place of the former Administration Building, the Alumni Gateway pays homage to the contributions of BGSU alumni in a park-like setting, offering people a place to study, socialize and relax.

“This project highlights the opportunity to recognize our current and future alumni,” said Pam Conlin, vice president for University Advancement and president and CEO of the BGSU Foundation Inc. “Time and again, BGSU alumni respond in significant ways to advance and improve the campus community for future generations. It’s exciting to see BGSU alumni and friends of the University be acknowledged for their generosity and celebrated at such a prominent connection to BGSU and the city.”

One of the gateway’s more prominent features is a fountain named in honor of William (Bill) Schmeltz, a former professor and dean in the Schmidthorst College of Business and longtime BGSU supporter. His wife, Peggy, earned a bachelor’s degree in business education in 1950 and a master’s degree in education in 1970. She also served as a member of the board of directors of the BGSU Foundation Inc. from 1996 to 2003.

Serving as a centerpiece to the gateway, the Schmeltz Family Fountain features nine programmable LED lights that can be lit to match any occasion.

“BGSU is grateful to Peggy and William Schmeltz for their generous support throughout the years,” Conlin said. “They have been associated with BGSU since 1944 when Bill enrolled. Since then, the couple has dedicated their lives to supporting education and student outcomes.”

Alumnus and current BGSU Board of Trustees Vice Chair Drew Forhan ‘81 and his wife, Nancy, also made a challenge gift to the project, inspiring alumni and friends to make contributions.

Additional opportunities to name features and be recognized in a project plaque are available. Those interested in contributing are invited to do so through Oct. 31 at BGSU.edu/Give.

A project years in the making

While contributions from alumni and community members helped make building the new Alumni Gateway possible, project planning and preparation relied on the dedication of multiple people.

In the works since 2010, construction on the gateway began in the spring, following the demolition of the Administration Building, which was built in 1961.

“It feels incredibly rewarding to see this project finally come to fruition,” said April Smucker, associate vice president of Planning, Construction and Campus Operations at BGSU. “The Alumni Gateway had been talked about and planned for years. Now that it’s finally here, it looks and feels like it’s always been there.”

Smucker said a lot of time and intentionality went into ensuring the Alumni Gateway would be a perfect fit among some of the University’s oldest and historic buildings.

“We wanted to make sure we got this right,” Smucker said. “From the brick choice to the lighting, a lot of meaningful and creative thought went into ensuring the Alumni Gateway complemented and honored the historic part of campus that it’s in. Thanks to teamwork, the gateway provides a seamless transition from the Bowen-Thompson Quadrangle right into the city.”

Smucker said she’s excited to see how the space will be used and enjoyed by those at BGSU and in the community.

“There is so much opportunity with this space,” Smucker said. “The Alumni Gateway is a true community connector and gathering place where people can relax and enjoy the outdoors. From concerts to student events and everything in between, it will be great to see how the campus community and city residents use it going forward.” 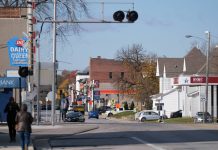