One of my endeavors with the Ohio State University Extension office is researching the production of Hops (Humulus lupulus). Hops are increasing in popularity among craft beer brewers, not only in Ohio but also across the United States.

One of the ways to find out if the Hops being produced will be acceptable to the brewers is to send the Hops to a laboratory for a complete analysis.

This past week as I was preparing the Hops for shipping to a lab, a frightening insect appeared. I never saw one of these before, it looked like something straight from “Jurassic Park.” It had the appearance of a scorpion without the front claws. After scouring all the literature I had on Hops, I sent an image of the creature to Dave Shetlar, emeritus entomologist from OSU.

Shetlar identified this as a female Carolina Leaf Roller Cricket. He also mentioned that Joe Boggs, extension educator in Hamilton County, found a male in July.

So, I had to know what a Carolina Leaf Roller Cricket is. Apparently, this cricket is a rarity. Its scientific name is Camptonotus carolinensis and it belongs to the family Gryllacrididae, the Raspy Crickets.

The cricket doesn’t have a common name approved by the Entomological Society of America, but it is commonly called the Carolina Leaf-Roller Cricket. A notable characteristic I did see was its extremely long antennae that appeared to wrap around the cricket’s body. Also, being a female cricket, it had an upcurved ovipositor used for egg laying, giving the cricket the appearance of a scorpion.

As with other raspy crickets, the Carolina leaf-roller is nocturnal. Quoting from the Field Guide: “During the day, individuals shelter in leaf rolls made by cutting into the edge of a leaf, folding over a flap, and holding the surfaces together with silk spun from the mouth. Somehow, the long antennae are completely contained within the shelter.”

Thus, the “leaf-roller” is the commonly used unapproved common name.

What I find interesting is Hops form 6 feet and above twining up sisal strings. How did this cricket — that cannot jump — get 6 feet into the leaves of the hop plant?

That is a question for another day. Regardless, it was an interesting find. Well worth the high-pitched sound I made when I was preparing the hops for the lab. Now I know the “Jurassic Park” insect is just a Carolina Leaf Roller Cricket. 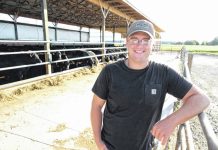 What to do about annual invasion of wasps