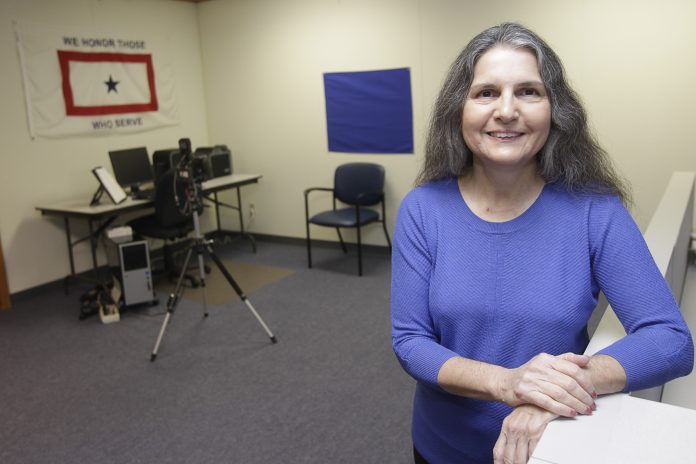 The Wood County Veterans Assistance Center in Bowling Green has been the site of a number of firsts over
the years.
Its executive director, Mary Hanna, was the first woman to hold such a post in the state of Ohio when she
took over the position in 1988.
The office was also the first in the state to issue veterans a special photo ID card, starting in 2006,
which included all vital information to verify their veterans’ status.
And now, the recently-expanded center is preparing to offer more firsts – teleconferencing innovations
that will save veterans considerable time and travel headaches as they navigate the system.
“All of it has come together,” said Hanna, who has been with the center since 1974, “and this vision, I
couldn’t be happier right now.”
“It really will be an advantage to them, right here at home,” she said. “We have about 10,000 veterans in
the county, and I believe that we have somewhere around 2,300 to 2,500 who are active recipients in the
VA health care system.”
The office, located at 1616 E. Wooster St., and which recently expanded to include the space next door,
plans to offer the long-distance video conferencing and assistance services during the first quarter of
2015.
“I believe we are the first county in the state of Ohio to do this” she said. “Again, we are a rural
county, and my focus is remote access and easy access to all veterans services that are available.
“A lot of these veterans, number one, don’t like to go to Toledo, even though it’s not so far away.”
One of the new offerings will be telemental health conferencing, which can be held in a newly-equipped
conference room, outfitted with a massive flatscreen TV and camera that will allow both visual and audio
communication. Hanna, an Air Force veteran of the Vietnam War, noted that a large percentage of veterans
returning from the conflicts in Iraq and Afghanistan have some level of post-traumatic stress. PTSD
screenings, she said, lend themselves to telemental health services that the office will be offering.
And it can save veterans a 35-mile trip to the Veteran’s Affairs facility in Toledo.
“We’re going to have the younger veterans with the PTSD screenings who, as soon as they are discharged
from the service, most of them find their way here,” she said.
When they are assessed, “we’ll be able to connect them with the counseling and other services they need.”

Another forthcoming video conferencing service will be benefits appeals hearings. Currently, to have such
hearings, veterans can travel to Washington, D.C., make an appeal before a traveling board, or engage in
a video hearing, which currently are held in Cleveland.
With the new capacity in the Wood County center, a veteran will be able to be in Bowling Green, with a
judge in Washington, and a veterans representative in Cleveland, and all can video conference together
to hold the hearing – and not only for the hearing, “but for the prepping for the hearing” as well, said
Hanna. Often veterans have to drive to Cleveland for such preparation sessions, usually held only an
hour before the actual hearing is held. Now the officers representing the case can meet at a more
leisurely pace well in advance.
The video conferencing processes have been tested and are ready to go for their premier early next year,
Hanna said.
Other less technological – but equally as important – new services have also been brought into the
office, including teaming with the county’s Troops and Family Assistance center, another first in the
state. The new resource will be available to veterans and their families once a week on Wednesdays.
Hanna noted that Patricia Markowski, who works in the center on Troop and Family Assistance, is already
seeing veterans in the office. Feedback on the program has been very positive, she said. Markowski, she
said, is also offering job assistance to veterans in the absence of a Job and Family Services
representative in the office, which is expected in the future.
“Through one agency or another they will have job planning assistance for our veterans,” said Hanna.
There is also the potential that budgeting and financial planning assistance could be added to the
services.
The expanded facility also includes a conference room for training and other programming, as well as a
station to issue vets their ID cards.