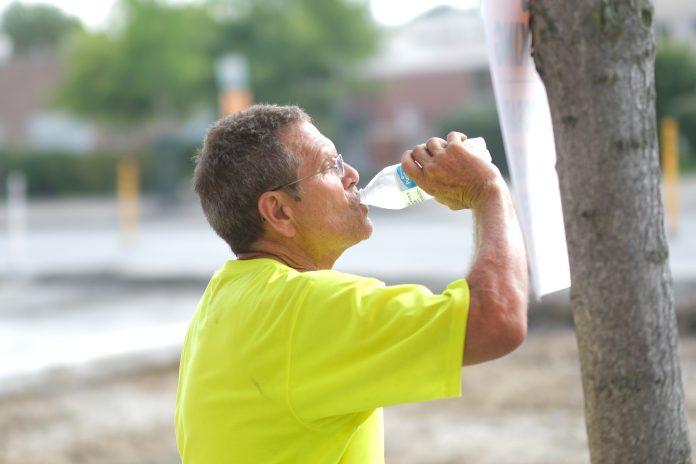 As temperatures soar into the 90s — and feel like 100 degrees — area residents are basking in the air
conditioning, treating themselves to ice cream and splashing in the pool to beat the heat.
Adrianna Tobin, manager of Dairy Queen in Bowling Green, said she’ll have extra staff on through the
weekend to serve cool, sweet treats, like $1 slushies and a Sour Patch Kids Blizzard.
It won’t be a surprise, though, if business is actually a little down, Tobin added.
“I think that it’s going to be so hot outside that people won’t want to leave the house and air
conditioning,” she said. “It’s too hot to go outside.”
More than 100 local heat records are expected to fall Saturday, according to the National Weather
Service. Most won’t be record-daily highs but record-high nighttime lows, and that lack of cooling can
be dangerous, meteorologists say. Temperatures in parts of the East won’t drop below the mid- to
upper-70s or even 80 degrees (26.7 Celsius) at night.
The heat wave will likely be “short and searing,” said Greg Carbin, forecast branch chief for the weather
service’s Weather Prediction Center.
A high pressure system stretching from coast-to-coast is keeping the heat turned on. The heat and
humidity are made to feel worse by the large amount of moisture in the air coming from the Gulf of
Mexico, much of it left over from Hurricane Barry.
Dr. Rory Strugalski, an emergency room doctor at Wood County Hospital, said people who can’t change the
environment on their own will have the worst time dealing with the heat. Those include the elderly and
infants.
“In general, the people who are going to most susceptible to heat-related illness are at the extremes of
age,” he said.
Strugalski suggested getting out if there’s no air conditioning at home.
“One of the things we talked about in residency is people using public places — malls, restaurants, movie
theater, library,” he said.
Take care of yard work and exercise in the morning when temperatures are lower, Strugalski said.
“If you have to be outside, minimize the amount of time, take frequent breaks and get into the air
conditioning,” he said. “If you have to stay outside and you don’t have any choice, seek any sort of
shade, wear a wide-brimmed hat or use an umbrella.”
Be aware of signs that your body isn’t handling the heat well, he said.
“Symptoms can vary, but some of the more common things that people are going to feel are general fatigue,
muscle cramping, palpitations, feeling like they’re going to faint.”
Stay hydrated with cold fluids, Strugalski said.
“I think plain water’s fine, but Gatorade or Powerade are more options,” he said.
People who have fainted or feel like they’re going to faint, have severe muscle cramps and feel
palpitations should get medical treatment, Strugalski said.
Lake Township Police Chief Mark Hummer said that officers who have to stay on an outdoor scene for an
extended period of time will get assistance.
“We’ll send medic on standby and request a squad from fire department to stand by, tell them to hydrate
or find a place to cool off,” he said. “We’re just going to hunker down and wait it out.”
Roger Ward, with B&J Concrete and Construction, Toledo, was putting in the new concrete base in
the downtown Bowling Green construction project on Thursday. He had a 10-hour day ahead of him in
90-degree temperatures.
“I drink plenty of water and Gatorade — fluids,” Ward said. “I increase my water and my fruit. Fruit has
that natural sugar in it. If I don’t drink my water or have my fruit, I will get leg cramps at night.”

He said he’s been doing the job for 35 years and is used to weather extremes. The heat does sap his
energy, something he feels at the end of the day.
“It takes a toll. When I go home and get in the air conditioning, I’m done for the day,” Ward said.
In Perrysburg, summer recreation organizers have plans to keep kids cool — if the program is still
scheduled. Softball and dodgeball camps have been canceled for Friday, said Charles Brigode, recreation
director.
“I’m running a hose out here for lacrosse, we’ll spray them. We’ll launch water balloons and run a
sprinkler,” he said on Thursday during an afternoon program. “We do whatever we can to keep the kids
wet. If they’re wet, they’re cool."
Water World is the city’s most popular program on Wednesdays, Brigode said, with 200 children registered.

“It was all slip and slides and water boards, so that was a lot of fun this week,” he said.
Wiley, a husky-mix dog with a double coat, won’t be spending much time outside, said her owner Monica
Lewis, Bowling Green. The two were at Wednesday’s pet show at City Park.
“We’re very aware of this with her,” Lewis said, adding that they always carry extra water for the dog,
limit walks and only allow her outside for about five minutes at a time.
Erin Moore, shelter manager for the Wood County Humane Society on Van Camp Road, said the pet residents
will be spending more time indoors the air-conditioned facility. There is a plastic pool outdoors, but
some of the dogs treat it more as a toy than a place to cool down, she said.
If people are uncomfortable outside, then animals probably are also, Moore said.
“It not only becomes a risk to the animals, but the people who are handling them,” she said of the heat.
“People should be heeding those warnings, too.
“Just be smart, if a person doesn’t want to be in the heat, keep the pets in mind.”
Moore is expecting an uptick in check-the-welfare calls to the humane society this weekend.
“We usually do, whether it’s really hot or really cold. We always just recommend if people see something
of concern, don’t wait a week or a month, call now so we can address it,” she said.
Pets should not be kept in vehicles, even if they’re running, Moore said. She urged anyone with livestock
to make sure the animals have access to plenty of fresh, cool water and that facilities are well
ventilated.
Some event organizers have changed plans to accommodate for the forecast.
Friday’s Lunch in the Park will be moved from the shelters in City Park to the banquet room in the
Simpson Building, 1291 Conneaut Ave.
Lake Township’s Music in the Park set for Friday in Friendship Park in Millbury was canceled.
Saturday’s free carnival in Christ’s Church in Bowling Green, 14455 Campbell Hill Road, has been moved
indoors.
The Wood County Committee on Aging will open the senior center in Bowling Green from 8 a.m.-8 p.m. on
Friday and 10 a.m.-8 p.m. on Saturday and Sunday.
Lunch and dinner will be provided for a donation. The senior center is located at 305 N. Main St.
The Brown Bag Food Project, 530 Sand Ridge Road, will be open from 9 a.m.-4 p.m. on Friday if someone
needs a cool place.