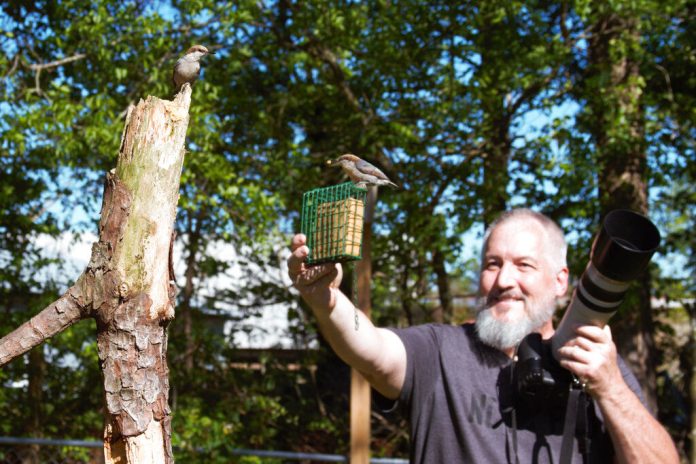 Conner Brown, a 25-year-old law student at Stanford University, spent the early days of the pandemic
following his brother as he spotted and collected characters in the Pokemon Go mobile game.
Then, Brown noticed the birds.
"I thought, ‘Why don’t I take up birding?’ It’s like real-life Pokemon Go. It’s super addicting
because you can start logging them and you get a little collection. It’s really cool," Brown said.
He paused, then added, "They should really game-ify it."
Brown, who’s living near Annapolis, Maryland, can now identify 30 different bird species. He can
recognize the calls of the brown-headed cowbird and cardinal and tell male birds from females. He bought
a special set of binoculars that attaches to his iPhone camera, downloaded bird identification and
bird-logging apps, and is giving birding advice on Twitter.
"The world of birds is so much more vibrant and active than I’d ever realized, and once I paid
attention, it just hit me in the face," Brown said. "It’s given me a reason to get out of the
house, it’s motivated me."
With coronavirus restrictions dragging on, interest in bird-watching has soared as bored Americans notice
a fascinating world just outside their windows. Downloads of popular bird identification apps have
spiked, and preliminary numbers show sales of bird feeders, nesting boxes and birdseed have jumped even
as demand for other nonessential goods plummets.
The trend coincides with peak migration for hundreds of species and nesting season, giving newfound
birders a front-row seat to some of nature’s biggest shows. Birds are their most active — and noisy —
now, and like Brown, many Americans no longer in an office or classroom all day are taking notice.
"The birds don’t know that there’s a pandemic. They’re migrating, building nests and laying eggs,
just like they always have," said Michael Kopack Jr., who put up a birdhouse at his home in Angier,
North Carolina, and is watching a pair of bluebirds hatch their eggs.
"It kind of takes us back to a magical time six or eight weeks ago when there was no pandemic,"
he said. "It lets me decompress and get away from everything that’s going on in the world, at least
for a little while."
Downloads of the National Audubon Society’s bird identification app in March and April doubled over that
period last year, and unique visits to its website are up by a half-million. The prestigious Cornell Lab
of Ornithology in Ithaca, New York, has seen downloads of its free bird identification app, Merlin ID,
shoot up 102% over the same time last year, with 8,500 downloads on Easter weekend alone.
Visits to Cornell’s live bird cams have doubled, and uploads of bird photos and calls have increased 45%
and 84%, respectively, on Cornell’s crowdsourced bird-logging app, eBird.
Even retailers seem to be cashing in despite the crashing economy. Preliminary marketing data shows
overall sales rising 10% to 15% this spring in the "birding category," according to data from
Panacea Products Corp., which makes bird-feeding products.
Amid the surging interest, spring bird counts nationwide are getting some adjustments for social
distancing. The counts are critical for understanding how migratory birds are faring and are a high
point for avid birders each year.
In Portland, Oregon, those participating in the Birdathon — a fundraiser for the Audubon Society of
Portland — will go bird-watching individually over a period of weeks instead of heading out in teams for
a day or a weekend. They will report their sightings by virtual check-in, ending with a Zoom celebration
on May 9, said Sarah Swanson, the fundraiser’s coordinator.
"Birds are everywhere now. They’re singing, they’re migrating, they’re nesting," she said.
"They’re busy every minute of the day doing all these interesting behaviors — and I think that’s
what draws people in."
Even people who loved the outdoors before the pandemic have discovered — or rediscovered — birding in new
ways.
Phillip Torres, host of Discovery Channel’s Expedition X, knows a lot about nature but hadn’t paid much
attention to birds, preferring to study insects, snakes and plants. When the virus postponed travel to
exotic destinations and forced his show into hiatus, Torres moved from New York City to Seattle. He
noticed birds in his new backyard, watching robins pluck worms from the ground "just like in the
cartoons."
With his professional video gear still in New York, Torres put up hummingbird feeders and invested in a
spotting scope and clamps to attach his iPhone to the feeders. He recorded stunning slow-motion video of
an Anna’s hummingbird coming to his feeder that he shared on Twitter.
"I managed to get something pretty spectacular that’s flying around us all the time, but we don’t
get the change to stop and appreciate it," Torres said.
"I’m really reconnecting with what’s immediately around me," he said. "Everybody dreams
about seeing lions in the wild or tigers in the wild, but we’ve got some pretty amazing stuff right out
our window — and it’s really good for the soul."
___
Flaccus reported from Portland, Oregon. Follow her on Twitter at http://www.twitter.com/gflaccus.