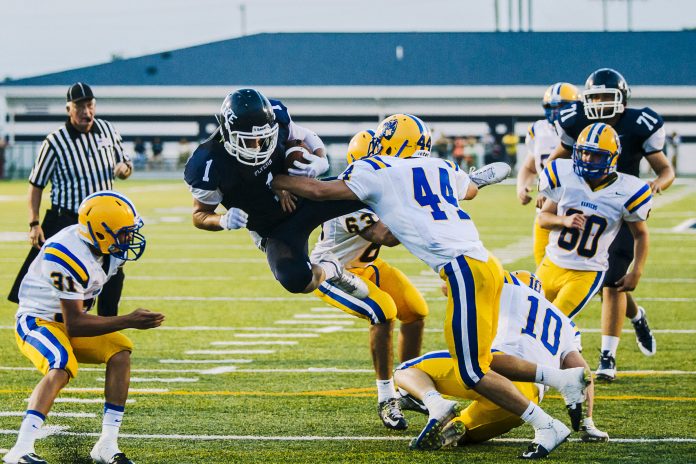 MILLBURY — At halftime of the Lake and Northwood football game, officials announced the game would be
postponed until Saturday at 1 p.m. PHOTO GALLERY
Lake went into halftime with 34-7 lead when a lightning delay was announced. About an hour later at 9:30
p.m., officials announced the second half will be played the following afternoon.
Lake head coach Mark Emans said his team will need to be mentally tough and mature to fight the
interruption of the game.
“I’m a big believer that kids are creature of habit and this is going to take us out of some of that
habit,” Emans said. “It’s going to be a battle, but we’re just going to have to overcome that.
Fortunately we have a fairly decent lead, but that can evaporate pretty quickly.”
During the first half, Lake got off to a quick start, gaining a 14-point lead against Northwood in the
first quarter. The Flyers expanded upon their lead in the second quarter, scoring two touchdowns early
in the quarter, taking a 28-0 lead.
With 8:47 remaining in the second quarter, Northwood finally made it to the scoreboard with a 1-yard rush
from Joey Woody.
In the closing seconds of the first half, Lake quickly got on the board again with an 8-yard pass from
sophomore quarterback Jacob Rettig to Brandon Taylor. Rettig entered the game mid-way through the second
quarter after his brother, senior Jared Rettig limped off the field. Jared Rettig did not return for the
rest of the half. He threw for four touchdowns.
Emans said Rettig will be ready to go for the second half of the game Saturday.
“(Rettig) just got a bruise on his knee, he’ll be fine for tomorrow,” Emans said. “We have to pick up
where we left off tomorrow at 1:00 p.m., and he’ll be good to go.”
Emans said Lake did nice things offensively, but they did not run the ball as effectively as he had
hoped.
“I thought we threw the ball extremely well,” he said. “We had really good pass protection and Jared made
some really nice plays throwing the ball for us.”
Once Jared Rettig was out for the game, Jacob Rettig came onto the field and also played well.
“For a young sophomore to come in and handle the pressure of that without any timeouts, he did a really
good job,” Emans said. “I was very proud of Jake. He’s a very mature kid for a sophomore.”
Eman’s team will approach the remainder of the game Saturday with the mentality that the score is 0-0.
Overall, he said his team needs to focus on the defensive side of the ball, tackling better defensively
and blocking the running game better.