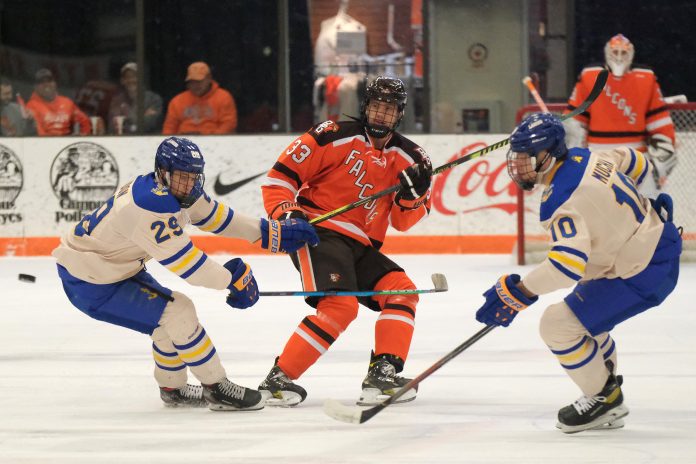 The No. 13 Bowling Green hockey team will be playing their last regular season series over the coming
week with the home-and-home against Alabama Huntsville.
The Falcons have played the most games in the WCHA and will now ready for their final two games of the
regular season.
Bowling Green is in second place in the WCHA standings along with a 6-5-1-0 conference record. The
Falcons will host the first game on Wednesday at 7:07 p.m. with the Chargers hosting the second on
Sunday at 4:07 p.m.
Alabama Huntsville enters the series against the Falcons with a three-game losing streak, being swept by
Lake Superior State and falling to Northern Michigan. The Chargers are 3-12-1 overall and 3-7-0 in
conference play. Those three wins have come against Ferris State, by scores of 5-4 and 2-0, as well as
Northern Michigan, 3-1.
UAH has scored at least one goal in all but two games this season, being shutout by Michigan Tech on Jan.
2 in a 4-0 final and against Minnesota State on Feb. 12 in a 5-0 score.
Alabama Huntsville is paced by freshman forward Tyrone Bronte who leads the team in nine assists and 13
points. Junior forward Bauer Neudecker has a team-high five goals.
Over the last nine meetings between the Falcons and Chargers, Bowling Green has been victorious on seven
occasions with one tie that the Falcons later claimed a double-overtime WCHA win. With the tie, BGSU is
4-0-1 over the last five games against Alabama Huntsville. Over those five games, the Falcons have
outscored UAH by a margin of 26-10, including a 9-3 victory on Dec. 6, 2019. All time, the Falcons hold
a 28-6-3 record against the Chargers.
This will be the first time that Max Coyle has faced Alabama Huntsville after transferring to Bowling
Green this past off season from UAH.
This past weekend Bowling Green visited Northern Michigan and came away with four WCHA points to reclaim
sole possession of second place in the WCHA standings.
In the first game, the Falcons and Wildcats skated to a 0-0 tie behind two outstanding goalie
performances. Eric Dop logged a career-high 38 saves while Northern Michigan’s Rico DiMatteo had 36.
The game went into the first shootout of the season for Bowling Green, seeing Northern Michigan take the
extra WCHA point on their sixth attempt. On the second night, the Falcons bounced back to tally six
goals. The Falcons saw 11 different players tally at least a point in the game with four reaching
multiple-points in the contest.
Bowling Green moved to 17-8-1 on the season and 6-5-1 in the WCHA.
It’s been a historical season for the Falcons and senior goaltender Dop. This past weekend, Dop logged a
career-high 38 saves en route to his seventh career shutout, tying him for second all-time in program
history. As for his single season performance, Dop is on pace to enter the record book there as well.
Currently, Dop has a save percentage of .924 this season which would be the third best mark all-time
behind Chris Nell (2015-16, .930) and Ryan Bednard (2018-19, .927). As for goals against average, Dop’s
mark of 2.24 would be the fifth best in program history.