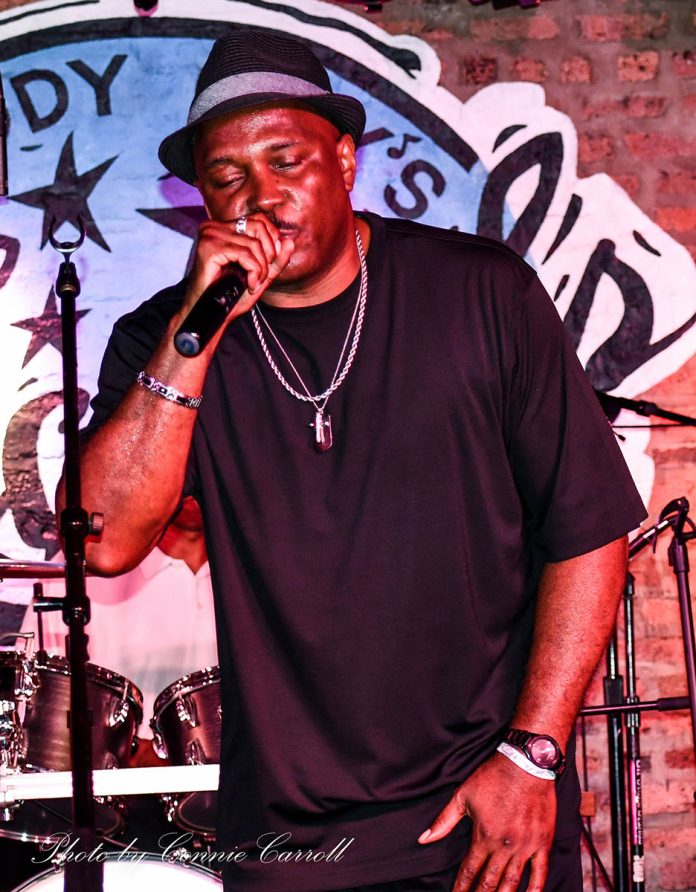 Joseph “Mojo” Morganfield, the son of Muddy Waters, will be headlining his first show in Bowling Green
with Waters’ guitarist Rick Kreher and keyboardist Maurice John Vaughn.
Morganfield grew up with the blues.
Blues enjoyed a renaissance in the 1970s as Morganfield was in elementary school. McKinley Morganfield,
who professionally went by “Muddy Waters,” was at the top of the genre. Bands like the Rolling Stones
were more than typical fans, actually working and recording with him. Eric Clapton called him his father
and Waters reciprocated calling him son.
Mojo remembers all of that. He remembers Clapton and Jagger at the house he grew up in, and blues music
everywhere, all day. He vividly recalls closing out local Chicago area sets with his dad, singing “Got
my Mojo Workin’.”
Morganfield isn’t shy about his voice and the comparisons with his father. While he says his voice is not
quite as deep, he’s learned from his dad.
“The control of your vocals. I watch the videos and tapes. I hear a song like a million times. The way he
can change a tone or a note, on dime, is just incredible to me, which I have not mastered yet, but I’m
working on it. His vocals were unique, almost like a Southern preacher,” Morganfield said.
He has been working on his own distinct sound for years.
Clapton, Keith Richards and other Chicago blues legends, after playing their own mega shows, would sit
with Muddy at a local bar.
One of those sessions became the documentary “Muddy Waters and the Rolling Stones: Live at the
Checkerboard Lounge,” released in 1981. Fans will recognize Rick Kreher, who played guitar with Waters
then and will back up Morganfield in Bowling Green.
He does do some of dad’s songs, but it’s no greatest hits cover show.
Morganfield is Waters’ youngest son and is touring to promote his first recording. “Mojo Risin’” is the
four-song EP he released at the end of last year. Morganfield is already working on the songs for his
first full length album. It was produced by Grammy-winner Michael Freeman, winning the award for his
work with Waters’ band veterans Pinetop Perkins and Willie “Big Eyes” Smith.
Morganfield builds those songs the old way, on the road, without production studio gimmicks. He’s written
some of them himself and others were written by Terry Abrahamson, who also worked with Waters.
He recommends his “Let’s Play Chess” and “Blow Wind Blow,” by Waters.
Morganfield’s bandmates are also veterans of real blues and the road.
Alligator recording artist Maurice John Vaughn will be also be singing his own songs, while backing up
Morganfield on keyboard and some guitar. The veteran multi-instrumentalist played at Third Street Cigar
in Waterville last year.
“It’s a lot of fun playing with Mojo,” Vaughn said. “I think it will be a very interesting show in
Bowling Green. It’s only our third show. We’re working on the new CD and doing some of his new work.”

Vaughn recommends Morganfield’s “Traveling Man” and “It’s a Man Thing.”
Vaughn has a smooth live show filled with sly humor, honed singing soul music in the 1970s which evolved
into Chicago blues. He’s played and toured with Luther Allison, Junior Wells and Phil Guy, Buddy Guy’s
brother. His most well-known song is “(Everything I Do) Got to be Funky,” but he has recorded with a
long list of Chicago blues artists including A.C. Reed.
“Maurice has been with me since I started this beginning of this journey. He’s recorded with me, and we
do gigs together. It’s like we’re connected,” Morganfield said.
Chicago blues aficionados will also recognize Mike Flynn on bass and Chris Alexander on drums.
Morganfield and Vaughn will play at Howard’s Club H Friday at 8 p.m.

Investor pulls out of Woodstock 50, leaving fest in shambles