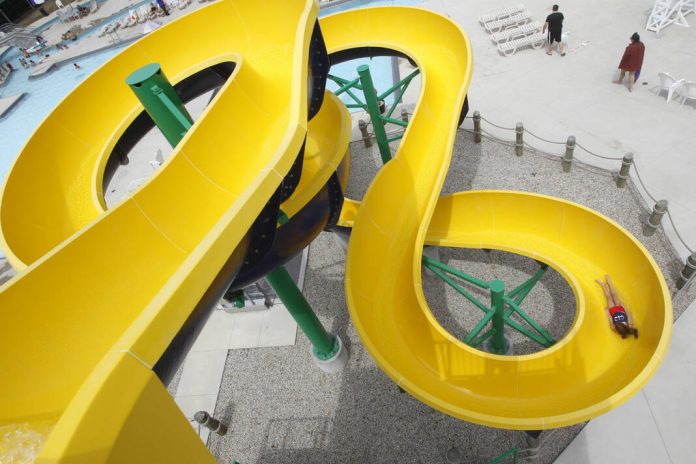 It may be winter outside, but the City Pool and Water Park complex was a main focus during Tuesday’s Bowling Green Parks and Recreation Board meeting.

The board discussed potential changes to the pool’s fees and operations for the coming year.

Among the possible changes was a 50-cent increase in the daily fee for non-residents at the pool.

Parks and Recreation Director Kristin Otley noted that last year, the board discussed a number of potential options for fee increases for the 2022 season. Ultimately, the board decided that if American Rescue Plan Act funds might be given to supplement expected cost increases, they would not raise fees. The city did transfer $25,000 in ARPA funds to assist the pool.

“There are no ARPA funds coming this year,” Otley said. “We kind of looked at everything that we talked about last year and, of course, there is still some economic uncertainty. … We definitely feel that and appreciate that.”

She said that there is a balancing act to ensuring that they have enough money to operate the facility, while also keeping the fees reasonable.

She also noted that the minimum wage is increasing 80 cents, meaning that based on 2022 total employee hours worked, that will increase staffing expenses by about $7,900.

That prompted questions from some members of the board.

“It is enough?” asked Ardy Gonyer of the proposed fee increase. “Should we be doing more?”

“We certainly could,” Otley said. “I guess the concern is that I kind of feel like there’s this ominous ‘we don’t know what’s happening with the economy.’”

She said they want to adjust the fees, but still keep them reasonable, but said they could look at different options. Otley said that another possibility would be to take action on something for this year, but then start strategizing for future years.

“I don’t see expenses going down anytime soon,” she said. “Things like chemicals, there was a big jump last year. … Obviously, staffing is our biggest expense.”

The board also heard about a proposed operational change aimed at hopefully reducing fecal incidents at the pool: requiring reusable swim pants instead of disposable swim diapers for pool visitors who are not potty trained.

The pool and water park experience roughly a half a dozen fecal incidents annually, which is a public health issue, has a high cost to clean the water, and creates a negative image turning people away, leading to lost revenue.

Otley noted that, due to a grant from the Bowling Green Community Foundation, they will be providing families with a free reusable swim pant. They would also plan to have them available for sale at the concession stand, at cost.

“This contains it long enough for the kid to get out of the water without a mess” in the pool, said Aquatics and Fitness Manager Josh Chatfield of the reusable pants.

He acknowledged that “it’s hard to find research and studies on how effective these are,” so this change, if approved, would be an experiment, he said.

Also Tuesday, the board heard about a third proposal: to close the facility for the season once Bowling Green City Schools begin classes in August. This year, school will begin on Aug. 22.

The document outlining the proposal noted that current practice has been to close during the week once school is back in session and then open for the two weekends left in the season. Otley noted that attendance during that time drops substantially and, since most of the employees are high school or college students, it has been harder to get staffing during that time.

The plan, instead, would be to open the facility’s Splash Pad during those days, which does not require staff to be present; the water only runs when someone pushes the buttons to use the facility.

The board is expected to vote on the proposals during at the February meeting.