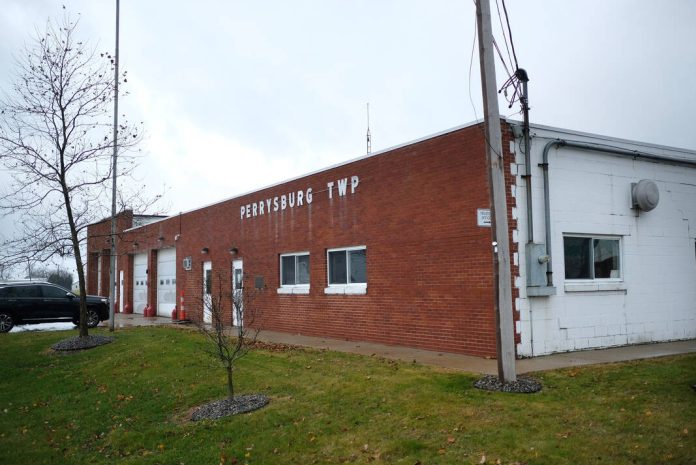 LIME CITY — After 15 years of discussion, a new administration building is topping the list of priorities in Perrysburg Township.

Township Administrator Jon Eckel said at Wednesday’s trustees meeting that his research showed that talks about a new building began on April 26, 2007.

He is recommending construction of a new 8,031-square-foot building behind the current building, on the west side of Lime City Road.

“This is nothing more than a first shot at something we might do,” Eckel said. “My hope and my idea is to build a new building behind this one. We would stay in here and work, without any interruption in service and without having to go anywhere and rent office units of any kind.

“When our new structure is complete, we would move from this building into that, and pick up without missing a thing,” he said.

After moving into the new building, the current one would be demolished and replaced with a parking lot.

A 2007 estimate for the cost of dealing with the renovations that the Poggemeyer Design Group considered necessary hit the $2 million mark. Among the issues that would have to be dealt with were mold, asbestos and structural failures.

Eckel issued an internal memo on the subject on Jan. 11.

“Having reviewed the various studies in the file, renovation is not an option. It’s expensive and in the end, we have an old building in a new suit. It’s too big, it’s too outdated and the structural members are failing,” Eckel stated. “Basically, we have about $1.8 million to build a building.”

His expectation is that a new building would be at the same $2 million price tag as the 2007-era renovations.

Eckel is confident that the balance of the funds can be found, because money has been set aside in the budget for several years in a row.

“It’s been in the budget for a few years,” said Fiscal Officer Gretchen Welch.

He has already put together a fact sheet to solicit design/build firm qualifications, rankings and get proposals.

The location would continue the campus feel, with the adjacent emergency services building that houses the EMS, police and fire departments. The proximity is also consistent with the desire to have a new communications center for the dispatchers housed in the municipal building.

Trustee Gary Britten added that he has concerns about the current dispatch center.

Eckel said all departments will have a chance to add input.

“Once we choose a firm, they will go around and talking to everybody, including all the communications officers, and try to build them something they can be proud of,” Eckel said.

An additional structure would be built for township maintenance equipment.

The service department currently houses equipment in part of the administration building. Eckel is recommending construction of a new insulated pole building style of structure with a concrete floor to accommodate that equipment.

Both Britten and Trustee Joe Schaller agreed with Recreation and Recycling Director Bob Warnimont that the recycling dumpsters needed a more permanent location, probably with fencing meant to keep materials more contained on site. Neighbors have complained that materials are caught by the wind and end up on their property.

Britten suggested that the county commissioners might be brought into the discussion with requests for funding assistance.

Trustee Bob Mack was excused from the meeting.