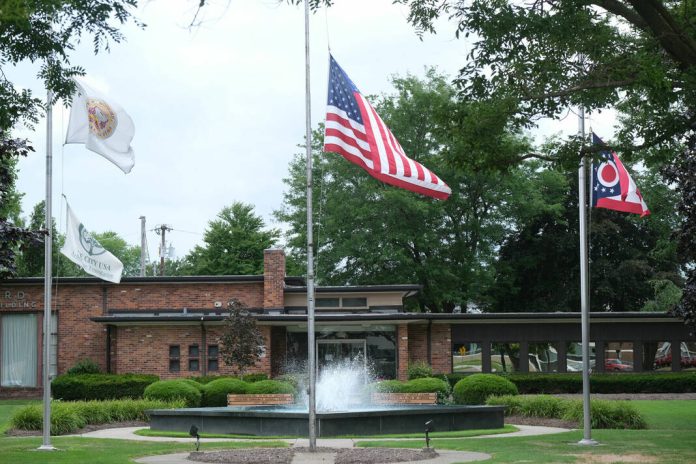 Two zoning ordinances were passed by council, as recommended by the Rossford Planning Commission.

A Rossford Municipal Code modification allowing truck and construction equipment repair and sales as a permitted use in Planned Industrial zoned districts was passed unanimously.

Council also unanimously amended the zoning code to increase the maximum height allowed for structure in the Planned Industrial zoning district from 35 feet to 50 feet.

Another ordinance, would have six parcels of land have zoning changed from Planned Commercial to Planned Industrial. The total acreage would be 34.48 acres on Lime City Road and 4.67 acres on Glenwood Road. The land is considered adjacent to Interstate 75.

“There’s no commercial application that’s going to go there. You’re not going to see a Target or a Kroger, or anything like that go there. And it’s one of the sites that has the most visible footage on I-75,” Mayor Neil MacKinnon III said.

Councilman Robert Ruse wanted the ordinance to go on to at least a second reading.

“Just like on the last couple zoning changes, that were just passed, and they were passed by the planning commission, but we have rules for a reason,” Ruse said about his lone votes against passage of the waivers on the second and third readings of the ordinances.

Ruse did vote for passage of the previous ordinances.

“The sooner we do this, the sooner we can get it to the market and everything in and around it is either expressway or Planned Industrial (zoning). So I would ask you, with all the momentum we have and the success we’re building, why would we wait? “MacKinnon said.

The vote for a waiver never happened.

Councilman Chris Heban said he had the impression that several other council members had further questions about the lots, so the ordinance didn’t go up for a vote to waive the second and third readings, like the previous two ordinances had.

Another ordinance, for the Ohio Department of Transportation to resurface the section of Interstate 75 between Ohio 199 and Glenwood Road, including a retrofitting with a noise wall, also had a first reading.

MacKinnon fully expects that ordinance to pass on a second reading.

“It’s another improvement that is a part of Rossford that we’re not financially responsible for and therefore a no-brainer,” he said.

Council also passed an ordinance authorizing an agreement with ODOT to resurface Glenwood Road from Mandell Road to north of Buck Road. ODOT will be responsible for 80% of the $375,100 cost, leaving $75,020 for the city to cover.

ODOT will also cover 80% of the construction of a roundabout at the intersection of Glenwood and Buck roads. The full cost will be $1.2 million. The city portion will be $147,840.

Council also had a first reading of the ordinance for new marina fees, which will be available for public view for possible comment at the next council meeting.

In other business, Police Officer of the Year went to new officer Travis Whitmore.

“He’s only been on for a little over a year. I think this is the first time someone with that much tenure has been voted Officer of the Year, so it’s a testament to his hard work,” Police Chief Todd Kitzler said.

A letter of commendation from Kitzler was read regarding the actions of Det.-Sgt. Patrick Kwiatkowski and officer Trey Farabee for their quick thinking and observational skills in investigation of the vehicle vandalism case that affected both Rossford and Perrysburg.

They discovered a hat left at the scene of one of the vandalism sites, which was sent in for DNA testing. The discovery of the owner of the hat led to an arrest in a case that involved more than 170 vehicles damaged.

Due to pending construction, the location of Monday’s council meeting has been moved to the city recreation center.