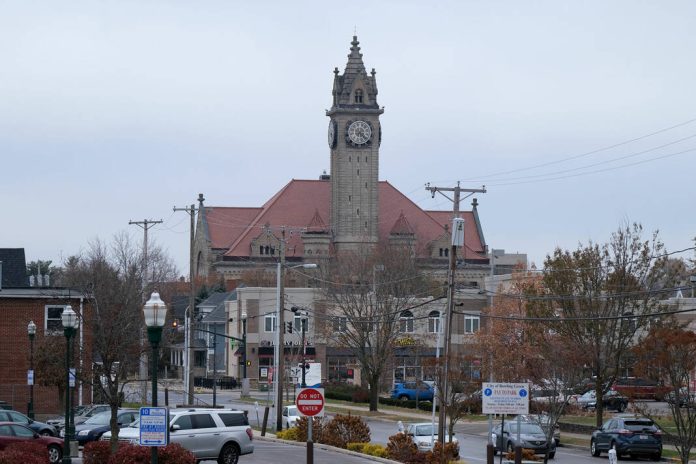 Three men from have been indicted for allegedly removing thousands of dollars of merchandise from a Perrysburg store.

On Dec. 5, loss prevention at Kohls in Perrysburg advised they had a male in the store concealing items in a bookbag he was wearing. The man was later identified as Kallas. Kallas reportedly met with another male, identified as Sevitz. The two men were observed selecting items then go into fitting rooms. When they exited, loss prevention could see that Sevitz had stuff items down his pants, according to the report. The two then continued through the store grabbing more items and concealing them. They then allegedly met up with Fitzsimmons. Kallas and Sevitz left the store and Fitzsimmons walked toward the jewelry section. Loss prevention reported Fitzsimmons stuffed his pockets with jewelry before exiting the store.

Officers approached the men and took them into custody. The total for the items stolen was $2,699. Items from TJ Maxx also were found in their vehicle.

William K. Stanley, 79, Perrysburg, for gross sexual imposition, a fourth-degree felony. On Oct. 28, he allegedly had contact with another male whose ability to resist or consent was substantially impaired because of his physical condition.

James Blake Stuckey, 24, of Hamilton, Indiana, and currently in jail, for domestic violence, a fourth-degree felony; and attempted felonious assault, a third-degree felony. On Dec. 21 on Juniper Court in Bowling Green, he allegedly assaulted a woman by grabbing her around the neck and pushing her into a cabinet. He then allegedly choked her for one minute causing the woman to feel like she was going to pass out. He had previously been convicted of domestic violence in Dekalb County, Indiana, in June 2022.

Justin Madrigel, 27, Bowling Green, for burglary, a second-degree felony. On Dec. 2 in the 900 block of South Main Street, he is accused of pushing the resident after forcibly pushing his way into the apartment complex. A neighbor heard the resident scream and removed Madrigel from the apartment. Madrigel had previously been trespassed from the residence.

James P. Mortimer, 31, Bowling Green, for possession of a fentanyl-related compound, a fifth-degree felony. Police conducted a traffic stop on Dec. 7 in Liberty Township. A probable cause search of the vehicle uncovered two pinch baggies containing a white powdery substance in his wallet. Testing of the substance determined in contained fentanyl.

Jason M. Cunningham, 43, Millbury, for forgery, a fifth-degree felony; tampering with records, a third-degree felony; and identity fraud, a fifth-degree felony. On Nov. 30, police were dispatched to a traffic crash on Interstate 75 in Perrysburg. One of the drivers said he did not have his license and could not remember his Social Security number. He gave a last name of Hoffman; a check with a law enforcement database showed a photo that did not fully look like man on scene. Back at the station, police called Hoffman’s wife, who said that the man was probably Cunningham, who was a childhood friend of her husband. A check of Cunningham on social media confirmed he was the man who had been involved with the crash.

Shayne Anthony Stowe, 36, Millbury, for vandalism, a fifth-degree felony, and trespass in a habitation when a person is present or likely to be present, a fourth-degree felony. On Dec. 4 in the 3400 block of Latcha Road in Millbury, Stowe allegedly kicked in the door of an occupied motel room before relocating to his own room down the corridor. He told police he meant to kick in his own door.

Lisa Amanda Mercer, 36, Toledo, for theft and receiving stolen property, both fifth-degree felonies. On Aug. 1, a resident in the 3500 block of Rivers Edge Drive, Perrysburg, reported more than 60 unauthorized transactions on her credit card. Mercer, a family member, had made the purchases, which totaled $6,300.

Nichole Lane Wolf, 46, Fremont, for aggravated possession of drugs, a fifth-degree felony. Police were called to Dollar General in Rossford on Aug. 1 for a woman concealing items in her purse and leaving without paying. The value of the items was $124. A probable cause search of her vehicle uncovered a white crystal-like substance with a cut straw. Testing showed the substance was methamphetamine. A warrant has been issued for her arrest.

Sean M. Hawes, 36, Dryden, Michigan, was indicted for three counts identity fraud, one a fourth-degree felony and two fifth-degree felonies, and three counts receiving stolen property, all fifth-degree felonies. On Sept. 29, he allegedly used the personal identification of another man to purchase more than $1,000 in property or services. He allegedly used the man’s credit card while having reasonable cause to believe it had been stolen. A warrant has been issued for his arrest. Hawes also was indicted with co-defendant Ibrahim Frank Fayz, 55, Dearborn, Michigan, for theft. On Dec. 7, they allegedly stole $4,732 in power tools from Bowling Green Home Depot.