All of Murphree’s points came on three-point goals, where he was 7-for-19. He only took shots from beyond the arc and there is a good reason for that. Often, he drains shots from 24, 25 feet, and he makes it look easy.

“That started with my dad (Kent Murphree),” Garette said. “He played at Toledo (lettered in 1991, 1992) and he was a real good shooter, and he just taught me from probably when I was not even a year old.

“He gave me a basketball and told me to shoot. That’s how I was taught,” Garette added.

For the Bulldogs, senior guard Brenden Revels had 14 points on 6-for-12 shooting along with four rebounds, five assists and four steals.

A second double-double was provided by senior guard Jake Morrison, who had 10 points, 11 rebounds, four assists and two steals.

Rossford improves to 8-2 and stays perfect at 5-0, chasing after the NBC title that eluded them last year. Otsego falls to 4-5 and 2-2.

Otsego did not get a shot off, committing three quick turnovers, until three minutes into the game. Meanwhile, Murphree hit his third triple with 2:30 remaining in the first quarter, giving the Bulldogs a 22-0 lead.

Murphree says the quick start was the result of the Bulldogs’ defense, which forced seven first quarter turnovers, including four steals by Revels.

“We started out hot and that was due to our defense and just how we created our own energy. We did that early and that helped us get the win,” Murphree said.

Rossford coach Brian Vorst said it was key for his team to make a statement from the get-go.

“It was important that we came out and played well. Like I was telling (Otsego) coach (Steve Carroll), you just don’t know what you are going to get on the road, on a Tuesday,” coach Vorst said.

“But the kids played with a lot of effort, they played hard defensively, and we knocked shots down. I was happy with the way we started the game.”

Otsego, which has no seniors, also showed an uncanny ability to shoot the ball once they were able to get shots off.

The Knights shot 35% (9-for-26) from beyond the arc, which had coach Vorst concerned, so he called a couple timeouts when his Bulldogs lost their discipline. He made sure his defense was extended to the perimeter.

“We were trying to extend a little bit because Otsego shoots the ball so well, so that gave some gaps and we gambled a little defensively to gain some stuff,” Vorst said.

“We were just trying to play hard is what it came down to in the second half and make good basketball decisions. Sometimes we didn’t,” Vorst continued.

“You know, they were 4-4, they are young, they make good basketball plays most of the time, so when you start extending on teams and everybody shoots it, they can really get you into trouble. If you don’t jump out to that big lead, you are in a dogfight.”

Murphree said that even with a 30-point second half lead in the third quarter, it was key for the Bulldogs to stay focused.

“We had to stay disciplined. They hit some shots when we weren’t, and I think that was the toughest part of having a lead is staying disciplined and making sure we got our job done defensively,” Murphree said.

Junior forward Jack Simpson led the Knights with 13 points, including hitting 3-of-9 shots from downtown, plus he grabbed five rebounds.

Junior guard Owen Weaver was 2-for-5 from beyond the arc, scoring 10 points. Simpson and Weaver combined to make 8-of-19 shots from the floor.

The Knights finished the game 12-for-37 (32%) from the field and had 16 turnovers to Rossford’s three. The taller Bulldogs established a 35-24 advantage off the glass.

Despite the loss, coach Carroll is pleased to where his young team is heading.

“We’re proud of the growth we’ve made but we still have a long way to go,” Carroll said. “We know it’s not going to be easy getting to where we want to get to. It just takes coming into practice every single day and getting better.

“Rossford is a solid team across the board. They are just so good, well-coached, and their players play so hard. We knew it was going to be a real battle but we’re trying to find little wins along the way and keep getting better.” 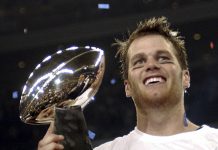