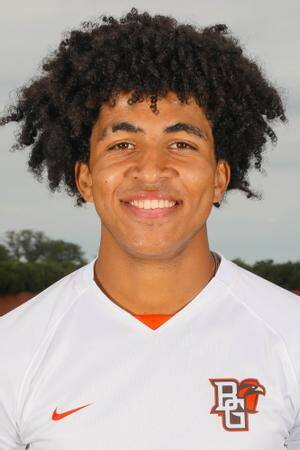 On Wednesday evening, Akpunonu was selected by FC Cincinnati with the 22nd overall pick.

Akpunonu, who recently completed his junior season with the Falcons, is the first underclassman ever to be chosen in the MLS draft.

“Joey is one of the hardest-working, most humble and talented young men that I’ve ever had the pleasure to work with,” said BGSU head coach Eric Nichols. “This really means a lot for both Joey and the program.

“It shows that we have been able to develop some talent here, but more than that, I think it shows the impact Joey has made as a model of how to go about your business. He has been an exemplary leader, not only with the work he does during training, but also before and after training, and the humility he displays.”

Akpunonu has earned a veritable plethora of honors this season. A native of Toledo (St. John’s Jesuit), he started all 16 matches for the Falcons in 2022, and was named to the All-Mid-American Conference First Team.

He led the Falcons in goals, with six, and finished second on the club with 12 points. Akpunonu also helped the Orange and Brown post seven shutouts in those 16 contests.

Akpunonu, the lone Falcon other than goalkeeper Brendan Graves to play all 1,440 minutes this season, scored the first goal of the match in three of BGSU’s four MAC victories.

At the other end of the pitch. He helped the Falcons set a school record for fewest goals allowed in a season. BG surrendered just 10 goals in 2022, with two of those 10 coming via penalty kicks.

He had career totals of eight goals and 19 points in 48 matches played at BGSU.

Earlier this month, Akpunonu was one of 44 players across the nation invited to participate in the adidas Major League Soccer College Showcase. Then, on Monday, MLS announced that he was one of the first eight players named to the league’s 2023 Generation adidas class.

Akpunonu becomes just the fifth BGSU player chosen in the MLS draft, and the fourth in the last eight seasons. BGSU Hall-of-Famer Steve Klein was chosen in the third round (22nd overall pick) of the 1997 MLS College Draft by the New England Revolution, while Ryan James was also a third-round pick, being taken by Sporting Kansas City with the 52nd overall pick in 2016.

BGSU went 6-5-5 overall in the 2022 season, and the Falcons finished MAC play with a 4-2-2 league ledger, finishing third in the conference. The Falcons will compete in the Missouri Valley Conference beginning next fall.

The Falcons have a record of 42-25-12 over the last 79 games, dating to midway through the 2018 season. Sixteen of the 25 setbacks in that time have come by a single goal.

“This is great for Joey, for our program and for BGSU,” said Nichols. “He is a true success story — a local kid that came to BGSU and earned a 4.0 GPA in the classroom while achieving amazing success on the field and ultimately becoming a first-round draft pick.”