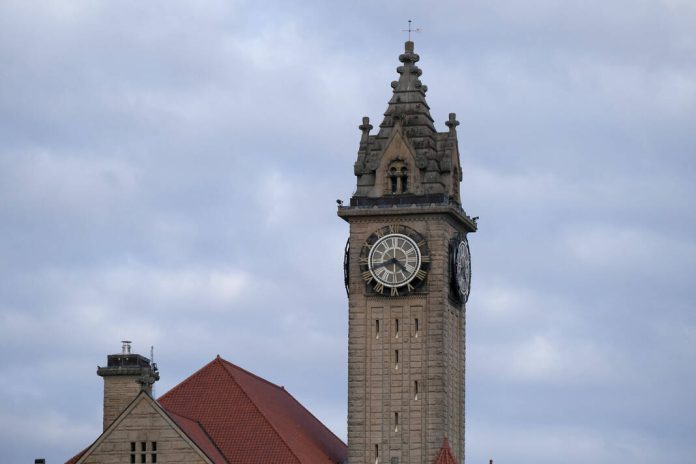 A Bowling Green man who beat up an 8-year-old so badly he had to be hospitalized is going to prison.

Jeremy Mull, 36, was transported from the jail Friday to the courtroom of Wood County Common Pleas Judge Joel Kuhlman.

A charge of felonious assault was dismissed.

Wood County Assistant Prosecuting Attorney Dexter Phillips asked that a sentence of eight-12 years be imposed for the F2 endangering charge and 36 months for the F3 endangering charge, to be served consecutively for a total of 11-15 years.

Anything less would demean the serious nature of this offense, Phillips said. Any sentence imposed for the domestic violence charge should run concurrently, he said.

“The facts of this case are clear that on Aug. 3, 2021, this defendant violently assaulted the 8-year-old victim,” Phillips said.

Mull caused serious physical harm to the boy and then denied him medical care, Phillips said.

When the boy was finally taken to Toledo Hospital on Aug. 7, 2021, a forensic nurse who conducted his exam said both eyes were completely swollen shut and he was having difficulty breathing from his nose due to the trauma to his face. His nose was covered in blood, his lips were cracked and dry and an open laceration above his left eyebrow that remained opened for several days was too dirty and too dry to close with stitches, according to Phillips.

The boy had half-circle bruise marks consistent with human bite marks on his upper right arm and right shoulder, and bruises and abrasions all over his face, neck, chest, back, arms, abdomen, groin and legs, Phillips said.

“That little guy went through hell,” he said that the nurse remarked.

Phillips presented the judge with an eight-page report from the nurse and four photographs showing the boy’s injuries and asked that they be considered for sentencing.

“Words really don’t do justice for the injures done to this 8-year-old child by this grown man,” he said.

The domestic violence charge stemmed from an incident on June 30, 2021, when the mother of the child told police he struck her in the face when she woke him up to go to work.

Phillips also said that Mull was indicted in October for felonious assault after he assaulted another inmate in jail.

Monica DeLeon, director of Victim/Witness Services within the prosecutor’s office, read a letter submitted by the family.

“To harm a child that was defenseless and unable to seek help is beyond out comprehension,” she read.

Since the assault, the boy has suffered numerous nightmares and emotional outbursts, DeLeon said.

He doesn’t trust adults and prefers to spend his time inside the house, she said. The family feels Mull cannot be rehabilitated and asked for the maximum allowed on all counts and that they be served consecutively, DeLeon said.

Defense attorney Kati Tharp asked that the pending case for the jail assault be stricken as her client has a right to innocence until proven guilty.

She also asked that the two child endangering charges merge for the purpose of sentencing.

Phillips objected and said the two charges result in separate harm: the physical abuse and the denial of health care.

The court is allowed the consider facts related to other charges, he added.

As a victim of domestic violence as a child, the parallels between what happened here and his childhood are not lost on her client, Tharp said.

“He could have chosen differently, but he didn’t,” she said.

During his previous prison sentences, sometimes due to drugs and sometimes violence, treatment was never court ordered. During this incident, Mull and the co-defendant were either high or coming off being high, Tharp said.

“Were it not for drugs, I don’t think we would be here today,” she said.

She asked for a sentence of six years minimum and nine years maximum.

“I’ve been a reflection of my upbringing, and the hurt I’ve suffered has become the pain of someone else,” he said.

Mull said that he can change.

“I know I can win this battle with myself with the proper support,” he said.

Kuhlman agreed that merging the two endangering charges was not appropriate. He also pointed out Mull committed these offenses while on post-release control.

The maximum is allowed due to the F2 felony charge falling within Reagan Tokes Act qualifications.

Kuhlman also imposed a one-year sentence for the post-release control violation, also to be served consecutively, and 18 months for the domestic violence charge to be served concurrently for a total of 12-16 years.

Mull will be given credit for time served.