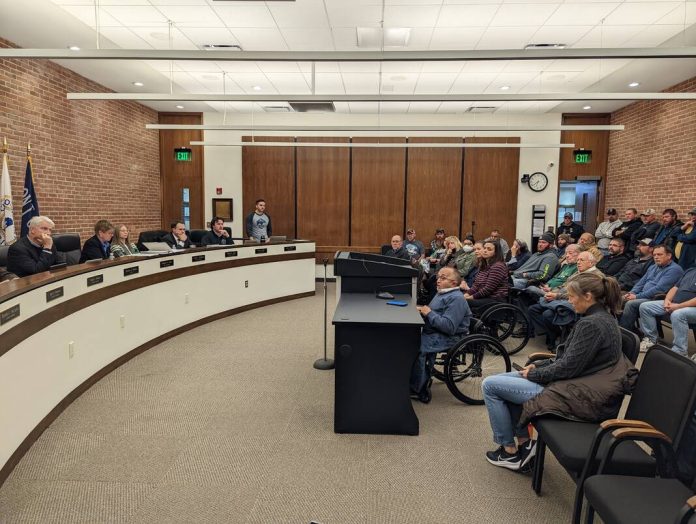 Council unanimously approved the 2023 budget, which was increased by more than $7 million from this year. The 2022 final budget was $26.8 million, and the actual 2021 total expenses were $25.4 million.

Prior to approval of the budget, council voted 5-2 to make $600,000 of the revolving loan fund unavailable for the administration planned $1 million downtown ADA compliance project.

“By no means is it saying that we aren’t going to make our downtown ADA accessible, but I don’t want to see us spend money on this knowing that we are going to have to come in and redo it all within five to ten years, because of the usability factor of it,” Council President Jonathan Smith said in a followup interview. “We’re coming into a recession. We’re coming into a time when banks aren’t lending as much. As businesses are looking to come into the community, we want to make sure we have funds set aside so there’s some ability to help with some financing.”

Debate about the project was vigorous.

Mayor Tom Mackin supported use of the funds, because they had not been used recently.

Smith explained the logic of the council vote.

“Where the funding was coming from for (the ADA project) was $400,000 from the general fund and the administration proposed to have $600,000 come from our revolving loan fund, which would have pretty much depleted it,” he said. “What council voted on … was to maintain the revolving loan fund in its place. It’s not saying that we are not moving forward on that, but what we are looking at doing is keeping the funds in there and making certain that we’re looking at our downtown holistically as well.”

Smith said that opponents of using the revolving fund cited alternate options for a larger project that was proposed by the Fishbeck architects and engineering firm. Smith said there are potential bottleneck points in the current plan that would affect the usability of the downtown area for events.

The alternative plan would change the tree planters for increased traversability, which Smith said take up a lot of space. A different parking configuration would also be included in the ADA compliance method. He would also like to see improvements to the electrical system for events like the farmers market.

Councilman Mark Weber said that many sidewalks outside of the downtown area are in poor enough condition that they prevent some residents from being able to use them to access downtown areas.

Smith said that there is still $200,000 in funds for sidewalk improvement and increasing the traversability of the city with multi-use paths, which would use a different funding source.

Weber said it was not enough.

“I think there is still an appetite, from the way I understood it from council, to move forward to revamp our downtown and keep ADA in mind as we’re doing that, instead of doing ADA by itself,” Smith said.

He added that once people can access the businesses, the Ability Center has grants and other methods that can help with the financial end of making accessibility improvements.

“And, sometimes, the changes are very minimal. There are a lot of ways we can help, but I think trying to do it holistically and get everyone on board at once is not very practical,” James added.

The two council members who voted against the exclusion of the revolving loan fund for the ADA project were Jan Materni and Tim McCarthy.

“Council members are being slightly short minded in pulling that, because the cost is only going to get more expensive. Since we already have it set aside now, that will help hedge the inflation,” Materni said after the meeting.