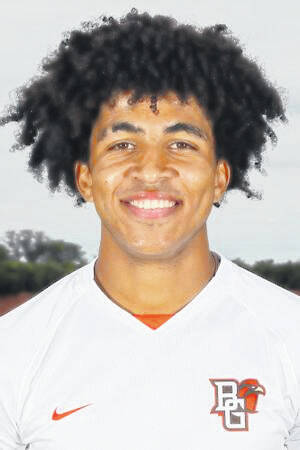 Akpunonu is one of just two Mid-American Conference players to be named to the Academic All-America First Team in 2022.

Akpunonu, a native of Toledo (St. John’s Jesuit), started all 16 matches in 2022 and was named to the All-MAC First Team. He led the Falcons in goals, with six, and finished second on the club with 12 points. The defender also helped the Falcons post seven shutouts in those 16 contests.

Akpunonu, the lone Falcon other than goalkeeper Brendan Graves to play all 1440 minutes this season, scored the first goal of the match in three of BGSU’s four Mid-American Conference wins. He now has career totals of eight goals and 19 points in 48 matches played.

He helped the Falcons set a school record for fewest goals allowed in a season. BGSU surrendered just 10 goals in 2022, with two of those 10 coming via penalty kicks.

In the classroom, Akpunonu has a 4.000 cumulative grade-point average as a biology major.

Akpunonu has been invited to participate in the adidas Major League Soccer College Showcase. Akpunonu is one of just 44 players across the nation who have been chosen for the event.

The adidas MLS College Showcase will take place from Friday through Monday, Dec. 9-12, in Raleigh, N.C. in conjunction with the 2022 NCAA Men’s College Cup.

The four-day event will give technical staffs from every MLS club an opportunity to scout these top collegiate prospects in the nation, including players such as Akpunonu with remaining NCAA eligibility.

The 2022 adidas MLS College Showcase is a closed-door scouting event officially sanctioned by the NCAA.

Technical staffs from MLS clubs will also attend the remaining College Cup matches in Cary, N.C. on Friday (Dec. 9) and Monday (Dec. 12). The eligible player list for the 2023 MLS SuperDraft presented by adidas will be announced at a later date following the 2022 adidas MLS College Showcase.