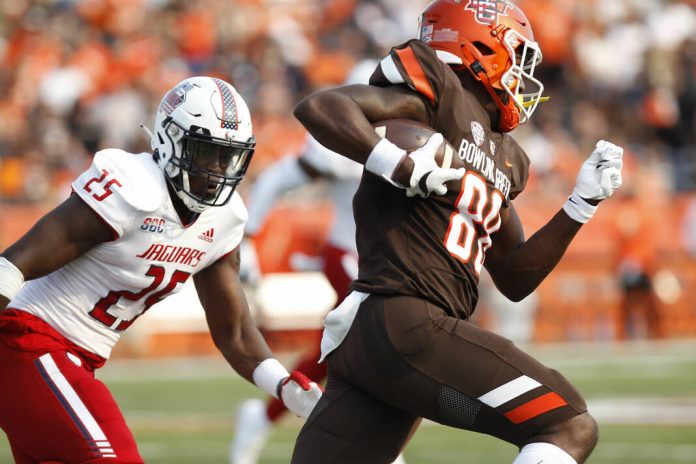 ­The Bowling Green State University football team has accepted an invitation to play the New Mexico State Aggies in the 2022 Quick Lane Bowl at Ford Field in Detroit.

The game is scheduled to kick off on Dec. 26 at 2:30 p.m., and will be televised nationally by ESPN.

The Falcons are 6-6 and finished 5-3 in MAC play. The Quick Lane Bowl is BGSU’s 14th bowl appearance (first since 2015) and first under fourth-year head coach Scot Loeffler. New Mexico State is 6-6 and currently competes as a FBS independent. Most recently they competed in the WAC (2005-12) and the Sun Bel Conference t (2014-17). NMSU is set to join Conference USA next fall.

The Quick Lane Bowl will be the first meeting between the Falcons and the Aggies in football.

“Our players and staff cannot be more excited to play in the 2022 Quick Lane Bowl,” said Bowling Green head coach Scot Loeffler. “It is a tremendous opportunity to play in Detroit, which is in our recruiting footprint. We are starting to prepare for a great New Mexico State program that finished the season winning four of five games. It will be an exciting game for both programs. I am looking forward to our great BGSU fans filling Ford Field to cheer us on as we go for our seventh win. Go Falcons.”

Quick Lane Bowl tickets in Bowling Green’s designated seating sections will go on sale on Monday at noon. There will be special pricing for Bowling Green fans, BGSU students and BGSU faculty and staff.

Obtaining tickets at 419-372-0000 or online at BGSUFalcons.com. Buying tickets through BGSU is the only way to ensure seating in the Bowling Green sections.­

“I’m pleased for the teams who have earned an opportunity to compete in the postseason,” said MAC Commissioner Jon Steinbrecher. “I’m sure our student-athletes and fans will enjoy the bowl experience in the communities that are hosting these events.”