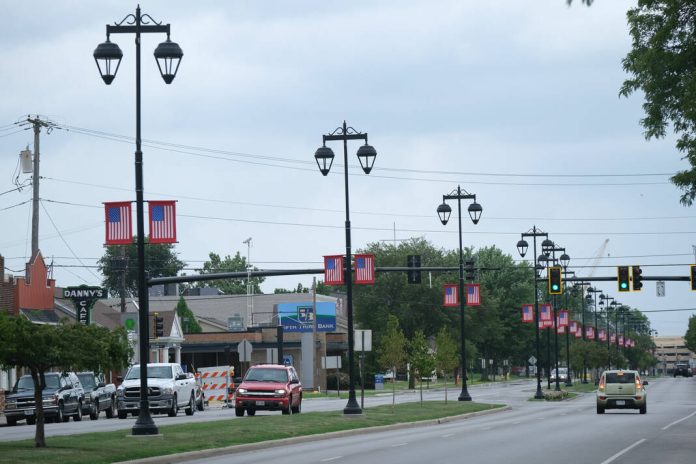 New conceptual artwork was presented at the Nov. 15 council meeting, when the Convention and Visitor Bureau presented their plans for the 125th anniversary celebration.

The location would also be the beginning, or entrance, to the proposed DORA that was introduced later that in that meeting.

The Toledo Design Collective created the plan. The goal is to make the park a destination for arts and cultural events, as a draw for visitors. The current pavilion, or gazebo, would be expanded by adding to the deck and removing fencing.

The recent design modifications were provided by Edge Landscape Architecture.

The park is already called the gateway to Rossford, by the RCVB. It honors Edward Ford, who is credited with building Rossford as a “company town.” The park was built for the centennial celebration, but the RCVB has had difficulties with utilizing it for activities and programming. The renovation concept began in 2017, and the Stroll the Street began in May 2019, followed by the launching of the “Building a Legacy Campaign, in November 2019.

Mayor Neil MacKinnon explained that the COVID pandemic hindered the revitalization and renovation process, which included securing funding through grants, sponsorships and donations. So far, the city has pledged up to $15,000 and a $2,500 ArtStart grant from the Ohio Arts Council was secured, as well as a $2,000 Cultural Tourism Planning Grant from Ohio Humanities and $16,000 in sponsorships from NSG, IPS, Amazon, Genoa Bank, Fifth Third Bank and Heban, Murphree & Lewandowski LLC.

An online survey of Rossford residents, following the 2019 Stroll the Street, found that 88% of respondents either did not know that the park existed, had never been to it or seldom visited. By the end of the 2022 season, the weekly event was bringing in 300 to 500 participants to see the live bands, 50 vendors and 20 food trucks.

Councilman Robert Ruse had comments regarding the changes.

“It’s nice that we are incorporating the space. I guess I’m a little surprised that we’ve gone five years down a path, with a lot of fundraising, a lot of donated time from engineers and architects and a design firm that had participation from the city, to a completely different plan that we spent money on,” Ruse said. “It never went through a committee to bring Edge on into the concept. So, I guess from that aspect I’m very disappointed.”

Ruse said that there were even materials purchased, which were scrapped, along with the earlier plan.

“This is better,” MacKinnon said.