The chapter has seven second-year members, including the officers and Kristin Ford, Natalie Redfern and Kailin Wargo. 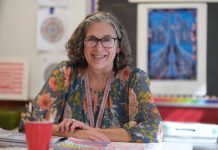