The Latest on the first round of the NFL draft.
Tua Tagovailoa’s health issues didn’t turn off the Miami Dolphins.
The Alabama quarterback, whose resume is as strong as any player in this draft were it not for several
injuries in his college career, went fifth overall to a team that was accused going into last season of
"Tanking for Tua." Tagovailoa comes off major hip surgery, which made his landing spot one of
the first round’s biggest uncertainties. A completely healthy Tagovailoa might have been the top overall
pick.
Blessed with a quick release, excellent mid-range accuracy and nimble feet, Tagovailoa threw 76 touchdown
passes in 24 starts the past two seasons. He helped the Crimson Tide to the 2017 national title.
___
The first offensive tackle in a strong group went off the board fourth overall when the New York Giants
selected Georgia’s Andrew Thomas.
A team leader with the Bulldogs, he can play left or right tackle. Thomas goes 6-foot-5, 315, has strong
hands and experience. He was a three-year starter and an All-American last season.
The Giants sought a young tackle to protect last year’s first-rounder, quarterback Daniel Jones. They now
have him.
___
The Detroit Lions grabbed the highest-rated cornerback in this year’s draft by taking All-American Jeff
Okudah of Ohio State.
Okudah was the second Buckeye taken early, third overall and one spot behind edge rusher Chase Young to
Washington. The top overall selection, LSU quarterback Joe Burrow, previously played at Ohio State.
A smooth and physical presence on the corner, Okudah can handle all sorts of coverages. He became the
11th Ohio State cornerback taken in the first round since 1999. He figures to start in a division
featuring opposing receivers Davante Adams and Adam Thielen.
___
Ohio State edge rusher Chase Young is headed to the Washington Redskins.
Many scouts and NFL personnel people believed Young was the best overall talent in this draft. With the
heavy focus on (obsession with?) finding quarterbacks, Young went second overall behind LSU QB Joe
Burrow to Cincinnati.
At 6-foot-5, 264 pounds, Young led the nation in sacks with 16 1-2 and forced fumbles with six last
season. The All-American won the prestigious Bednarik and Nagurski awards in 2019, leading the Buckeyes
to the Big Ten title.
He joins a team that went 3-13 and allowed 435 points.
___
No surprise atop this NFL draft as the Cincinnati Bengals have selected Joe Burrow, quarterback of
national champion LSU, as the centerpiece of yet another rebuilding job.
Burrow, the third straight Heisman Trophy winner taken with the first overall selection, joins a team
that went 2-14 in 2019 under first-year head coach Zac Taylor. The Bengals scored 279 points last
season, third worst in the league, and also ranked 30th in total offense.
The previous time Cincinnati grabbed a Heisman quarterback to open the draft, it was Southern
California’s Carson Palmer in 2003. Palmer led the Bengals to the playoffs twice.
In his spectacular season, Burrow threw for 60 — yes, 60 — touchdowns with only six interceptions. The
Tigers beat six top 10 teams on their way to the national title.
___
ESPN analyst Todd McShay said he won’t be part of the network’s broadcast of the NFL draft because he’s
recovering from the coronavirus.
McShay said in a statement that he’d be back and thanked the tireless work of health care workers and
first-responders, calling them "truly our nation’s heroes."
Because of the pandemic, this year’s draft will be held remotely and broadcast on ESPN, ABC and NFL
Network.
The first round is Thursday night and McShay, who has been at ESPN since 2006, was slated to be part of
ABC’s prime-time network coverage.
___
NFL Commissioner Roger Goodell will take a special, virtual hand-off before announcing Cleveland’s first
draft pick.
Fletcher Rollinson, a 12-year-old Browns fan who has been battling a rare form of brain cancer, will make
a video introduction before passing things over to Goodell, who has been forced to serve as master of
ceremonies in his basement in a New York City suburb because of the COVID-19 pandemic.
Fletcher and his family live in Rocky River, Ohio, near Cleveland and the youngster recently returned
home following a lengthy stay at St. Jude Children’s Hospital in Memphis.
Last year, Fletcher had a tumor removed and the youngster has undergone a series of proton therapy and
chemotherapy treatments during his recovery.
During a break from therapy, he visited the Browns’ facility last season and struck up a friendship with
star wide receiver Jarvis Landry, who gave Fletcher a pair of gloves before a home game. Landry also
wore one of Fletcher’s wristbands during every 2019 game.
St. Jude and the NFL have partnered for the past eight years to raise awareness and funds for pediatric
care.
___
Six teams are scheduled to sit out the first round of the NFL draft, though that could be a mirage.
The Colts, Rams, Texans, Bills, Bears and Steelers don’t own opening-round picks after previous trades.
They certainly could trade back into the round, which could, of course, cost them next year’s top
selection.
Indianapolis gave up the highest spot when it traded for the 13th pick to San Francisco for defensive
tackle DeForest Buckner, who then signed a new contract worth about $21 million per year.
The Dolphins, who have three first-round selections, got No. 18 overall from Pittsburgh for defensive
back Minkah Fitzpatrick, who was a star for the Steelers in 2019.
The 19th spot belongs to Las Vegas — that’s the Raiders, folks — as part of the 2018 deal that sent
Khalil Mack to Chicago. No. 20 belongs to Jacksonville in exchange for cornerback Jalen Ramsey, a deal
made during last season with the Rams.
Buffalo acquired wide receiver Stefon Diggs from Minnesota for the 22nd spot, and Miami has Houston’s
slot, No. 26, from last year’s deal for tackle Laremy Tunsil.
___
More AP NFL: https://apnews.com/NFL and https://twitter.com/AP_NFL 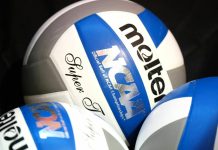 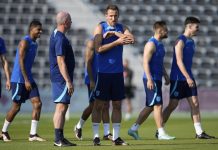 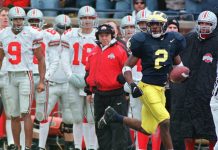