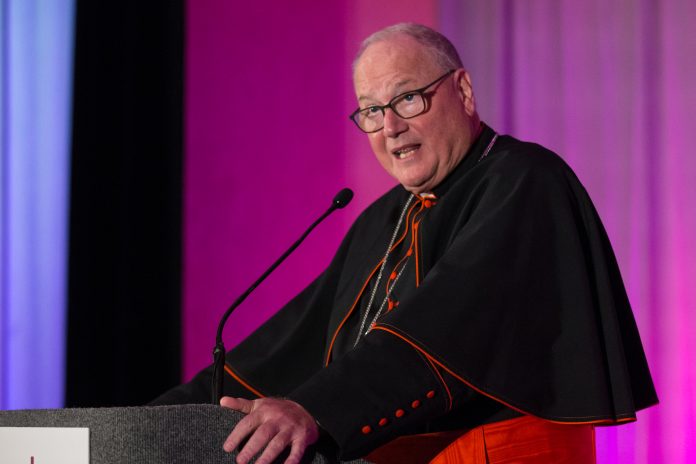 PERRYSBURG — The annual fundraiser gala for the Catholic Charities of the Diocese of Toledo was held
Sunday night at Hilton Garden Inn at Levis Commons and featured guest speaker Cardinal Timothy Dolan,
Archbishop of New York.
The theme was “Answer the Call” — which admittedly almost sounds like a vocational plea as opposed to a
charitable fundraiser.
Rodney Schuster, executive director of Catholic Charities explained that everyone in the faith is a
disciple of Jesus and is called to serve in his or her own way.
Dolan and Daniel Thomas, Toledo’s bishop, first met when they were both serving at the Pontifical North
American College in Rome years before either were elevated to their current positions within the church.
Thomas in his introduction of Dolan stressed how important people’s names have always been for the
cardinal.
“It’s the call of every single disciple of Christ in the church to serve our neighbors in need. The best
way to do that is to always ask their name. For many their name is often the only possession they may
have.” Thomas said.
“Always ask their name. That way you honor their dignity in person before you in Christ Jesus. They are
not an object but as Christ they are a person of God. Caring for their name honors their dignity. Every
person is important, every person has value.”
Dolan began with a story illustrating his sense of humor for which he is noted.
When he was at a program in Cleveland he was given an 18-year-old bottle of Irish whiskey.
“I once was taught that if an Irishman tells you it is an 18-year-old bottle, it is a lie. No true
Irishman would let it sit around that long,” Dolan said.
He then focused on a parable from a recent Gospel reading in the church that focused on Lazarus and the
rich man.
“I remember one of the best homilies I ever heard on this topic was when Pope Benedict said, ‘Jesus knew
the name of the poor man Lazarus, but he did not know the name of the rich man.’ The Bible is to comfort
the afflicted and afflict the comfortable.”
Adding, “You did it to me. When Timothy Dolan dies, he will be asked not about his accomplishments but
about his service to the poor. My eternal salvation depends on my answers.
“One way we can show that is through Catholic Charities,” Dolan said.
Prior to the dinner and program, Dolan, who is one of five active cardinals in the United States, spent
time with members of the media.
When asked what is the biggest challenge facing the Catholic Church today, he said it is rebuilding the
trust of the faithful that was lost in the sexual abuse cases that were not handled properly.
“We always have to bring the divine into our world. It’s a big challenge, but I am glad to see we are
making good progress. Religion thrives on trust and confidence. Catholic Charities is a big part of
that.”