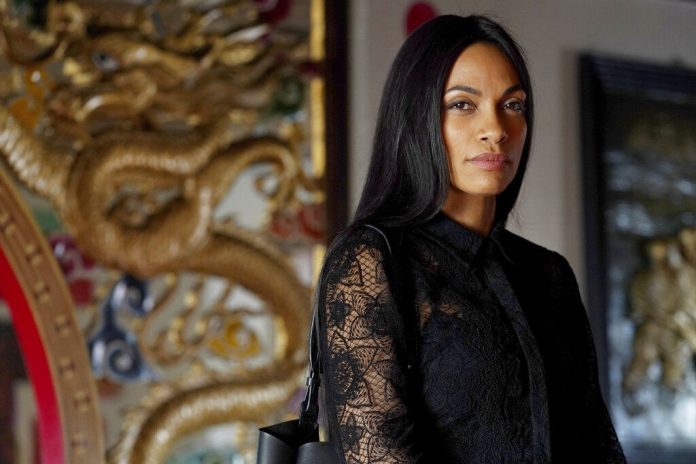 NEW YORK (AP) — Rosario Dawson has graced both the big and small screens, in everything from dramas to
comedies to Marvel superhero projects, yet she’s rarely been cast as the lead in a project.
That has changed with her USA series " Briarpatch" where she plays fashionable political fixer
Allegra Dill, who returns home to her Texas border town following the bombing death of her police
officer sister. She’s turning over all stones, attempting to solve the murder in the quirky, gumshoe
drama, which made its debut last month.
"I’m not used to being No. 1 on the call sheet and the few times that I have have been small little
indie films that I’ve produced myself," said Dawson.
She says she doesn’t take the series for granted: "I know a lot of actors who shoot pilots and then
the show doesn’t ever get picked up and continue. And then we did."
Dawson has consistently stayed busy both on Hollywood sets and political stages with former Democratic
presidential candidate and current boyfriend, U.S. Sen. Cory Booker (Booker sat in on the interview,
snapping pictures with his phone). However, she calls this her toughest role to date, balancing the
strenuous physical challenges of the role with her personal challenges as her father battles pancreatic
cancer.
"It just was so interesting, vacillating between this incredibly raw emotional experience with my
dad and then playing this character who is trying to figure out how to deal with her grief and even
appreciating her grief because she just lived such a hard life," said Dawson. "I’ve just never
had so many of all of my faculties and energies being pulled out at once."
The Associated Press spoke with Dawson about being a leading actor, inclusion in Hollywood and her
longstanding commitment to political activism. Questions and answers have been edited for brevity.
___
AP: What’s this role been like for you as the star of the series?
Dawson: I got to see all these different things, not just the intensity of the work and the rigor that’s
demanded, but really also the opportunity to be there every single day. There’s so much of so many films
and projects that I’ve worked on that I missed because I wasn’t on set.
AP: You’ve always been vocal about representation, and even though streaming services have allowed for
more diversity, it’s doesn’t seem to reflect that in awards shows like the Oscars.
Dawson: The gatekeepers of culture have looked in a very particular way for a really long time, and the
reality is they still do. They had a very particular strong hold on want that content would look like.
But now with streaming services, there’s demand and they’re starving for as much content as possible. So
I think the financial aspect has definitely piqued people’s interest to be more inclusive and more
representative.
AP: Eva Longoria and Zoe Saldana joined the LA Collab initiative which hopes to double Latino
representation in Hollywood by 2030. Do you think that can help? (A study by the Annenberg Inclusion
Initiative found that less than 5% of the nearly 50,000 of speaking or named characters in films from
the last 12 years were Latino.)
Dawson: We have we have a lot more work to do, especially when you talk about the Latinx community,
because we over-index online, we over-consume everything … we’re the largest minority in the country.
… The power is there — it’s being recognized. But right now, it’s mostly just being commodified and
like taken in as a consumer sort of perspective and what we’re really needing to (do is) push back.
AP: This is the 15th anniversary of Voto Latino, your voter mobilization organization and you’re also in
a relationship with a former Democratic presidential candidate. Do you know who you’ll support now?
Dawson: This year, and that’s something Cory and I talk about actually quite a lot, is just how critical,
and I think we’re seeing that on a regular basis, just how critical it is to have representation that’s
actually repetitive of this nation in Congress and in the Senate. And so for me, that’s probably my
biggest focus now that he’s no longer the front runner that I can support in the presidential race …
But for me, more — not more than that — but I think, in equal terms, but in a sense more because it only
happens every 10 years, is the census. That is something that is, I think, really, really critical. And
we’re going to see a lot of fervor around this presidential election, but we’re not hearing nearly
enough about the census. … So that’s something that I’m really pushing for.
____
Follow AP entertainment journalist Gary Gerard Hamilton at twitter.com/garyghamilton