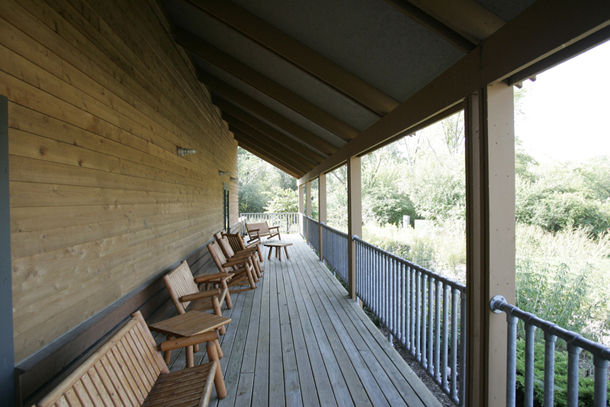 BRADNER — A deal to take dirt out of a Northwood park to make a pond is back on — only with a different
company.
At Thursday’s Wood County Park District Board meeting, held at the Bradner Interpretive Center, Director
Neil Munger said he was approached by Kokosing Construction, a Columbus-based company, about taking the
fill dirt from the area, leaving a pond for the J.C. Reuthinger Memorial
Preserve.
The work can begin as soon as a parking lot design is complete, showing the parameters, Munger said.
The project will also include installing a traffic light, making it easier for vehicles to come in and
out of Reuthinger.
There is no price on the project yet, he said, but money from the Ohio Department of Transportation will
be used toward the signal.
“It’s not going to be a cheap project,” Munger said.
Creating a pond, which would be used for fishing and kayaking, is part of the board’s long-range plan for
Reuthinger. The plan had been to create a 6.5-acre pond, north of the greenhouse and existing building.

“One of the things that we get the most questions about is fishing ponds,” Munger said after the meeting.
“This is going to be an answer to that.”
There will be a shallow area in the back of the pond that will be used for kayak lessons. There will also
be a kayak launch and canoes and rowboats will be able to use the pond.
“Where the field is now, it’s going to be pond and parking lot,” Munger said.
The board had made a similar deal last year with E.S. Wagner, Toledo, on the condition that the company
win a bid on a large Ohio Department of Transportation Interstate 75 project. It did not get the
contract.
Munger on Thursday said there was a year clause in the E.S. Wagner contract. Kokosing had known about it
and a representative contacted him 365 days to the expiration date to do the new pond deal.
There is a two-year guarantee on the pond with Kokosing.
The board unanimously approved the project. Board member Dennis Parish was absent.
The four members attending and Munger were spread out in the interpretive center, practicing “social
distancing” due to coronavirus concerns. There were two reporters, also seated far apart from each other
and the board.
Also at the meeting, the board:
• Canceled the April meeting, due to coronavirus concerns. All park programs and rentals have canceled
through May 18.
• Approved a memorandum of understanding to bring a Portage River Water Trail to William Henry Harrison
Park in Pemberville. It will go to the mouth of Lake Erie, Munger said.
• Approved buying a mulcher attachment from Ohio Cat for $39,418. This will go with a piece of equipment
that the board purchased last year.
• Authorized the staff to purchase a used mini-excavater, not to exceed $35,000.
• Gave TEV Roofing LLC, Bowling Green, the roof contract for the Harrison park building. They had the
lowest bid of $8,960 for asphalt shingles.
• Voted to buy 23 aluminum tables for W.W. Knight Preserve in Perrysburg for $8,530.
• Approved spending $11,998 for seeding at the 26-acre, new addition at Harrison park. Half of the cost
is being funded through a Clean Ohio grant. The large farm field there will be planted as a natural
prairie. The seed, which includes specifics for hummingbirds and butterflies, will be bought from Ohio
Prairie Nursery. “We know it’s good seed and it’s right for our area,” Munger said.
• Decided to spend $8,736 for North River Workshop, Pemberville, to make and install new doors at the
Zimmerman School. The board had a lot of discussion about the purchase before approving it. Board
members Sandy Wiechman and Kim Rose said they were concerned about the high cost.
The new doors were needed because the old ones, which are around 40 years old and made from pine, are
being eaten by raccoons or insects. The purchase was approved, with Rose abstaining.
“One thing we want to remember,” said board member Bill Cameron, “is these are custom doors. … With the
historic school, I just feel it’s really important to keep it authentic.”
“We need to have them as authentic as we can, we need to do that,” Wiechman said. “I get it.”
• Voted to approved the $5,000 purchase of a 1938 antique tractor. It will be used at events and at
Carter Historic Farm.
• Approved the final change order for Sawyer Quarry Preserve, for $197 for carpet by the children’s
climbing wall. The new interpretive center should be open later this spring.