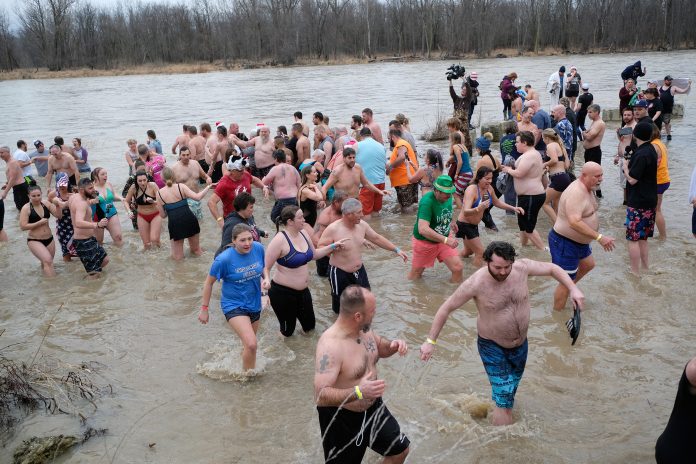 LIME CITY — The Polar Bear Plunge will have emergency personnel on duty at Buttonwood Park on New Years
Day — without a fee.
“We just want people to be safe,” said Perrysburg Township administrator Walt Celley. “We have paramedics
on duty 24-7 and we will have the duty ambulance parked there for a few hours with a couple paramedics
and a police officer, someone who is already on duty to help with traffic. This is not expected to be a
rowdy group.
“At most they will be out there a couple hours. Our paramedics do this frequently. We’re really just
saying, here’s a concentration of people and we are just cutting down the response time.”
Township trustees had an issue with the possibility of emergency personnel overtime charges, but Celley
said that they worked out a way to have the on-duty personnel at the location so overtime would not be
charged.
“It will be crews that are already on duty. There will be no overtime,” Celley said.
There has also been an issue with the park and the associated parking lot, which has been closed by the
Wood County Park District because of ice jam damage and debris left from last winter.
“As for parking, they will just have to park where they can,” Celley said. “We’ll give them some
barricades they can use. They will set them up themselves.”
The township right-of-way from the Hull Prairie Road extension, also called the Buttonwood Access, is
open to the river, but the parking lot is closed because of debris. Celley said there are less than 30
spaces that might be usable.
“We don’t have anything to do with the parking. It’s not our event. It’s going to occur in the township
and will occur in a public use area and we’re going to give them some extra attention in that area just
so people are safe,” Celley said. “This is not expected to be a huge event, like some of the half
marathon running events held in the past.”
There had been discussion about the possibility of a shuttle service, but Celley said that was not
something the township would be part of and that most people would likely park along the road.
“My understanding is that next year they will be back in Waterville,” Celley said.
In a Jan. 2 story on this year’s plunge in the Sentinel-Tribune, those in attendance may have numbered
close to 2,000 as cars filled the park’s lots and lined the entrance way. The overflow stretched along
Ohio 65 and Hull Prairie Road, as well as into adjacent housing developments.
For decades the tradition was held in Waterville alongside the Waterville Bridge. When that site was
unavailable due to the ongoing construction of the new bridge, new organizers arranged for the popular
tradition to continue.
The plunge annually starts 2:30 p.m. in honor of the late Herb Mericle. He began the plunge in
remembrance of his wife whom he married at 2:30 p.m.
Buttonwood Park is expected to remain closed into early next year.
The park damage was caused by a hard freeze in late January, followed by a rapid thaw and “regular” cold
winter weather. It was similar to ice damage that also occurred in 2015 and ended up costing $100,000.

After the damage in January, the board had discussions about limiting funds for the park.
The debris from the January damage is still at Buttonwood. Staff had been waiting on equipment and by the
time they got it, the grass was too high.
A volunteer cleanup date in July was canceled due to extreme heat and wet conditions.
A note on the Buttonwood Park tab on the park district’s website says: “Warning! Buttonwood Recreation
Area is CLOSED until further notice. It has suffered extensive damage from ice shoves and flooding and
is currently unsafe, so the park is closed. Thank you for your understanding!”