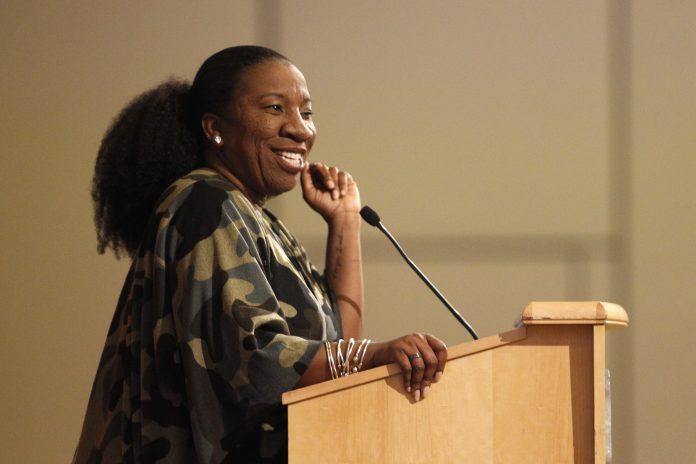 Whether you call yourself a victim, a survivor or a thriver, there are allies who want to help and there
are so many pathways to healing.
“Our work is about healing and action,” said Tarana Burke, who spoke on the Bowling Green State
University campus Tuesday as part of the Ordinary People, Extraordinary Stories lecture series, hosted
by University Libraries.
Her campaign, the #MeToo movement, has emerged as a rallying cry for people everywhere who have survived
sexual assault and sexual harassment.
A sexual assault survivor herself, Burke is now working to assist other survivors and those who work to
end sexual violence.
“Every hashtag is a human being, and we have forgotten that. We’re trading on the labor of survivors and
we’re not giving them anything in return.”
There is no silver bullet, Burke said. She is one person who had one idea and knew it was a good idea.

“This is a movement made up of ordinary people who can do extraordinary things. It is going to take all
of us doing what we can at our capacity to move the needle even a little bit.”
The phrase “me too” developed into a broader movement following the 2017 use of #MeToo as a hashtag
following the Harvey Weinstein sexual abuse allegations.
Since that time, people around the world have raised their hands and said, “me too,” Burke said.
“They’re still waiting. … They’re counting on us. Hell, they are us.
“We have to recognize the urgency of this moment,” she said, comparing this movement to the Black Lives
matter movement.
“But we don’t have the same urgency in this moment, because people can’t see our wounds. … We are
literally the walking wounded.”
Burke described herself as a Bronx nationalist, and said she was sexually abused at age 6.
But the credo in her family was “our business was our business.”
At the age of 14, she got involved with the 21st Century Youth Leadership Movement. She said she could
identify injustice, but didn’t know how to get involved.
While at Auburn University, she formed the African-American Student Alliance. She started attending a
21st Century Leadership camp in Selma, where every year the conversation would shift to sexual violence.