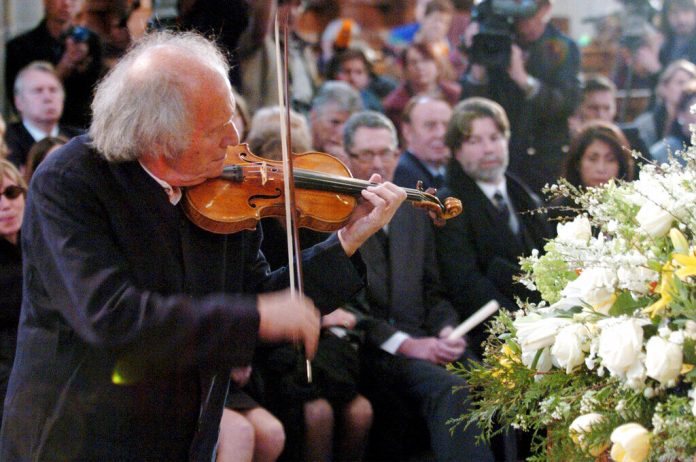 PARIS (AP) — Ivry Gitlis, an acclaimed violinist who played with famed conductors, rock stars and jazz
bands around the world and worked to make classical music accessible to the masses, has died in Paris at
98.
France’s culture minister announced his death Thursday, hailing him as "a magnificent performer, a
generous musician" who dedicated his life "to serving all kinds of music." The cause of
death and plans for funeral arrangements were not immediately announced.
Recognizable in recent decades by his long white hair and distinctive caps and scarves, Gitlis began
playing in the 1920s and performed into the 2010s. The Paris Philharmonic celebrated "one of the
longest and most prolific careers in the history of music."
Gitlis was born in Haifa in 1922, and sent to the Paris Conservatory at age 10 under the guidance of
violinist Bronislaw Huberman, the ministry said. He continued training in Europe and the U.S., where he
performed with leading conductors starting in the 1950s.
Gitlis performed with the Rolling Stones and jazz stars, appeared on French television shows and founded
a French music festival in the 1970s where listeners ate and slept in a field while listening to music.

Among his many worldwide appearances, Gitlis was the first Israeli musician to perform in Soviet Russia,
in 1963, according to Le Monde.
He held charity concerts in Japan after the devastating 2011 earthquake and tsunami while many other
performers canceled shows, Japan’s Kyodo news agency reported, and played a violin made from wooden
debris from the disaster.