FILE – In this June 10, 2019, file photo, drivers race at the NASCAR cup series auto race at Michigan
International Speedway in Brooklyn, Mich. IndyCar will race Saturday, April 11, 2020, at Michigan
International Speedway, one of the most beloved tracks that long ago fell off the open-wheel racing
schedule. The race will be aired on NBC Sports with Dale Earnhardt Jr., just announced as a NASCAR Hall
of Fame nominee and a driving force in the success of the iRacing phenomenon, making his IndyCar virtual
debut. 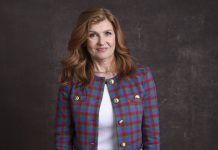