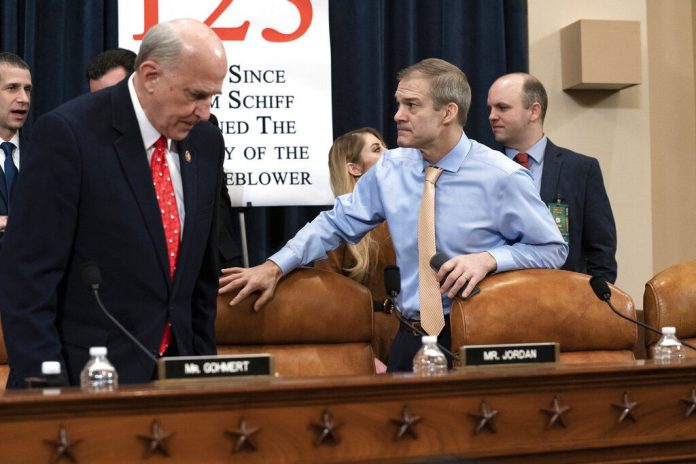 WASHINGTON (AP) — The most raucous committee in Congress sat stone-faced, barely speaking.
One by one, the members around the Judiciary Committee dais voted on the articles of impeachment against
President Donald Trump. Then they bolted for the doors and the airports, in more than one case without a
word.
The all-business iciness during those eight gavel-to-gavel minutes reflected the gravity of advancing
articles of impeachment to the House floor for only the third time in American history. But it also told
much of the story about impeachment’s toll on Congress, Washington and beyond.
Ever since Trump’s July 25 phone call with Ukraine’s president sparked official proceedings against the
president, impeachment has been a force that’s bent congressional business around it, with severe
strain.
No one feels sorry for Congress, and its members generally don’t feel sorry for themselves. But the
wear-and-tear of impeachment is becoming clear in the emotional exchanges and frayed relationships left
in its wake.
"I have a problem with this whole damn place. If you can figure out an exit strategy for me I’d
appreciate that," said Rep. Ken Buck, R-Colo., a member of the Judiciary panel, on Friday.
"This is crazy. The whole thing is crazy," he added of impeachment. "It will take some
time to get over."
Tempers are short. Members show signs of being sick of each other, like any colleagues who spend too much
time together. But they are operating under the glare of a global spotlight and the weight of history.

Trust, or what remained of it after years of obstruction and smashmouth Trump-era politics, appeared to
be a casualty in the short-term.
Thursday’s grueling 14-hour Judiciary Committee markup of the abuse and obstruction charges against Trump
ignited the smoldering tension. There was no expectation that the articles would be substantially
changed, but Trump’s allies pushed for amendments, each of which took hours to consider. Democrats,
meanwhile, did not want to take final votes too late for Americans to see.
Just before midnight, Chairman Jerrold Nadler announced that the committee would not be voting on the
impeachment articles until Friday morning — and after he banged his gavel, the microphones were switched
off. Livid, Republicans leapt to their feet, yelling "unbelievable" and "sneaky" and
talking of a "kangaroo court." Nadler walked out.
"Chairman Nadler’s integrity is zero. His staff is zero," fumed ranking Republican Rep. Doug
Collins of Georgia. "This chairman has made himself irrelevant."
The personal stab at the powerful New York House veteran was unusual, as even the most mismatched pairs
atop committees typically refrain from attacking each other in personal terms.
"I could feel it myself and I know the rest of us did," said Rep. Madeleine Dean, a new member
from Pennsylvania, in an interview Friday with The Associated Press. "That really was sort of the
apex of weeks and months of emotional and mental and intellectual toll."
It turns out that impeachment is not the Democratic morale-booster that some might have thought in the
heady first days of the party’s House takeover this year, when Michigan Rep. Rashida Tlaib vowed to
"impeach the motherf—-er" on her first day in office.
One Democrat involved in the impeachment investigation was so dispirited by it all that he decided this
term will be his last.
"The countless hours I have spent in the investigation of Russian election interference and the
impeachment inquiry have rendered my soul weary," said Rep. Denny Heck, D-Wash., in his retirement
announcement Dec. 4. "At times, it is as though there are no rules or boundaries. … Civility is
out. Compromise is out. All or nothing is in."
There’s a long way to go before knowing which party benefits and which pays for impeachment in the 2020
elections, let alone which fares better in the eyes of history. But trust — by Americans toward Congress
— seems to be suffering. And it’s not clear the proceedings are changing minds. Recent polling shows
that about half the country supports impeaching and removing Trump from office, fitting the pattern of a
deeply polarized nation.
But the proceedings could be costly for both parties.
A plurality of Americans — 44 percent — said they had no trust at all in the House impeachment
proceedings, according to a Monmouth University poll conducted in December.
The poll also found that about 6 in 10 Americans said Democrats in Congress are more interested in
bringing down Trump than pursuing the facts. Likewise, about 6 in 10 said Republicans in Congress are
more interested in defending Trump than pursuing the facts.
With the stakes so high, emotions are, too.
Dean, whose family has grown by two grandchildren since impeachment began in September, grew emotional
Friday when she talked about the responsibility of weighing the president’s fate.
"I’ve been thinking about the broader horizon," she said. The same week of Trump’s July phone
call, she happened to talk on the floor of the House with Rep. Elijah Cummings of Maryland, the
Oversight Committee Chairman who died in October.
Cummings, she said, reminded her that people will know she was here for what’s expected to be the third
presidential impeachment in American history. "It will matter," she said.
But it will not have come for free.
By the time Nadler gaveled the committee back into session Friday morning, the silences and swift
proceedings suggested there was nothing left to say, let alone fight about.
Nadler sat down, pulled out his cellphone and turned it off. He gaveled in the meeting and launched votes
on both articles. During the roll call, Rep. Pramila Jayapal, D-Wash., voted aye while holding up a
pocket-sized copy of the Constitution. Collins delivered a scripted notice that he reserves the right to
file dissenting views.
Nadler dropped the gavel. There was no celebrating or showboating from the Democrats.
"The House will act expeditiously," he said. "Thank you."
He took no questions.
___
Associated Press writers Andrew Taylor, Hannah Fingerhut and Padmananda Rama contributed to this report.