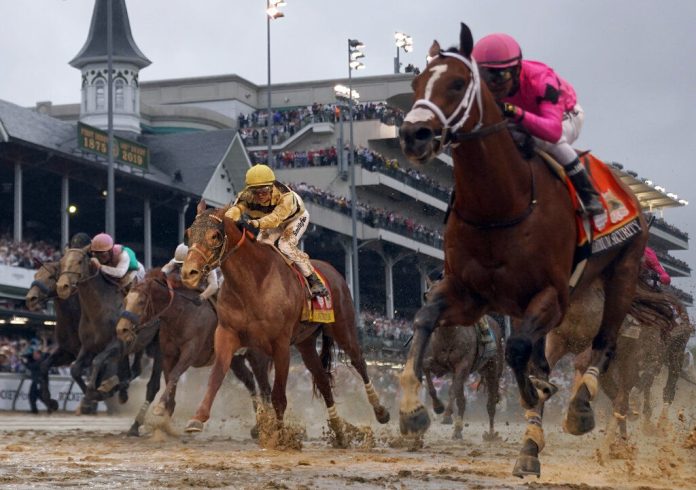 LOUISVILLE, Ky. (AP) — Officials cited Maximum Security for interference and the colt became the first
Kentucky Derby winner to be disqualified for violating a state regulation that penalizes horses for
impeding the path of another in a race.
Stewards, who supervise the outcome of horse races, referenced Section 12 of rule 810 KAR1:016. The rule
calls for disqualification if "a leading horse or any other horse in a race swerves or is ridden to
either side so as to interfere with, intimidate, or impede any other horse or jockey." Stewards
determined that Maximum Security interfered with the path of several horses as the field of 19 rounded
the final turn in Saturday’s race.
Maximum Security crossed the line first by 1 3/4 lengths before two jockeys filed objections against the
horse for interference. Stewards took 22 minutes before overturning the finish and elevating Country
House to first while dropping Maximum Security to 17th.
Kentucky Horse Racing Commission chief steward Barbara Borden said she and two other stewards interviewed
riders and observed several video angles of the incident and determined that Maximum Security impeded
the progress of War of Will and interfered with Long Range Toddy and Country House.
Maximum Security co-owner Gary West strongly disagreed with the ruling and said he is considering several
options, which could include appealing the stewards’ decision.
___
More AP sports: https://apnews.com/tag/apf-sports and https://twitter.com/AP_Sports