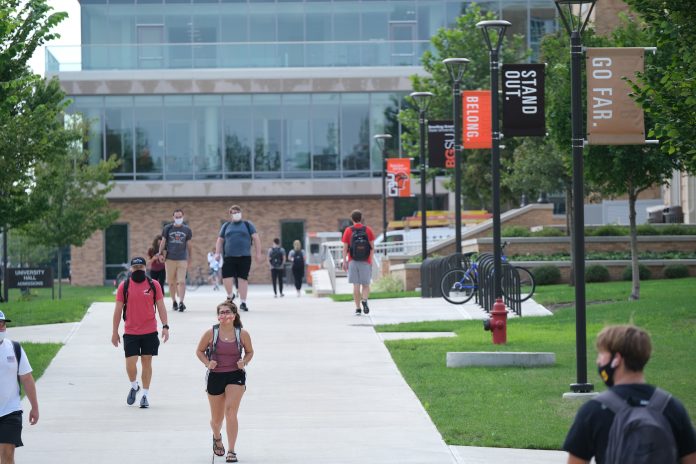 Bowling Green State University is prepared to stay open through the pandemic, according to the chief
health officer.
In an update to the Wood County Health District Board on Thursday, Ben Batey said that when coronavirus
became a concern in the spring, shutting down everything made sense.
“This looks very different than it did in the spring,” he said of fall semester.
The virus was new and not widespread in Ohio. The easier response was to go home and shelter in place,
said Batey, who was the former Wood County health commissioner and just recently took the newly created
BGSU job.
“We’re in a very different position in our knowledge of the virus,” he said.
Closing the university and sending everyone home is not a good option, Batey said.
“I don’t know that we would,” he said. “We may have to make adjustments.
“They are members of our community and it’s not so easy to say ‘close things down’ and send them home.
They’ve signed leases for the year, this is their home.”
Health board member Bob Midden asked Batey about the level of cooperation in contact tracing.
“On campus we have a lot more control,” Batey said. “The residence halls are a lot more controlled
environment right now.”
Off-campus students are being responsive, he said.
‘They do not want to be the ones who spread this to their friends or the members of the community,” he
said.
Board President Cathy Nelson also asked Batey about two educators who are claiming that there is a likely
outbreak among the BGSU student population.
“We respect that opinion,” Batey said.
However, he said, the university has been working diligently and on a daily basis with the health
department, Wood County Hospital, Wood County Emergency Management Agency and the Bowling Green mayor
and council.
“These have been our partners,” Batey said. “We’re leaning on all of that expertise.”
University officials are making decisions based on feedback from all those entities.
“We’re not doing this in a silo. Ultimately, we’re making all these decisions with the community’s
interest.”
Starting next week, the university will begin random surveillance testing, which has always been a goal,
Batey said.
The goal is to do 400 random surveillance tests per week, he said.
They are also trying to use tests strategically, so they don’t take all available tests to use on
asymptomatic students, he said.
Batey also said that the university has a dashboard that is updated weekly, and may be updated daily.
BGSU had 62 students report positive cases of coronavirus this week. Last week it was 38.
“We certainly want to be transparent as we all go through this together,” he said.
Students who test positive are being encouraged to isolate here, not go home, Batey said, to reduce the
spread — especially to immediate family members.
The university has 120 isolation beds, but they are in limited use, with three or four in isolation in
that space, Batey said.