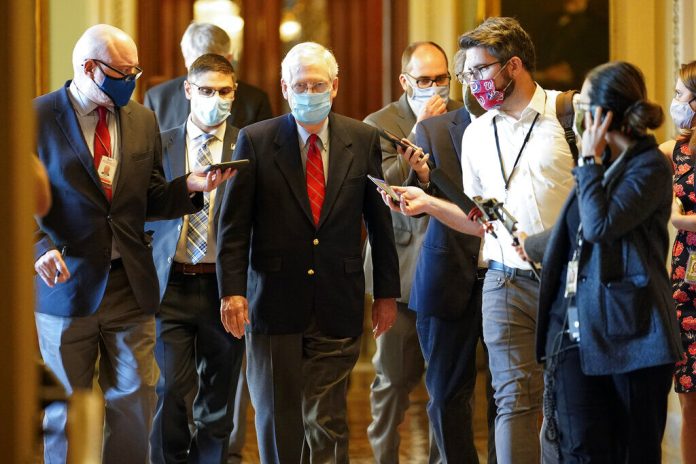 WASHINGTON (AP) — Despite President-elect Joe Biden’s victory, Senate Majority Leader Mitch McConnell
said Monday President Donald Trump is "100% within his rights" to question election results,
as GOP lawmakers fall in line behind the White House.
The Republican leader’s remarks, his first public comments since Biden was declared the winner of the
presidential election, show how reluctant Trump’s allies on Capitol Hill have been to defy the
president, even in his defeat.
Most Republicans are refusing to congratulate Biden or declining to push Trump to accept the outcome,
even though there is no evidence of widespread voter fraud.
"Our institutions are actually built for this," McConnell said as he opened the Senate.
"We have the system in place to consider concerns and President Trump is 100% within his rights to
look into allegations of irregularities and weigh his legal options."
McConnell said the process will play out and "reach its conclusion."
Republicans’ are closing the Trump era much the way they started it, by joining the president in
shattering civic norms and sowing uncertainty in institutions, now in a way that threatens the nation’s
normal transition of power.
Privately, Republicans on Capitol Hill say they are in a tough spot, wary of crossing Trump and his most
ardent supporters. But their actions are casting doubt on the durability of nation’s elections system
and impeding Biden’s new administration. The head of the General Services Administration under Trump has
held off on formally beginning the Biden transition to the White House.
Trump has declined to concede the presidential race and is mounting legal fights in several states, but
there has been no indication or evidence of voter irregularities or widespread fraud in the election.

The president’s refusal to accept the results means the election disputes could drag for weeks as states
certify their tallies or push to mid-December, when the Electoral College is set to vote.
With the Senate majority on the line, Republicans don’t dare risk alienating Trump or his supporters
ahead of Biden’s Jan. 20 inauguration.
In Georgia, where Trump is teetering and both Republican senators are being forced into a Jan. 5 runoff
that will determine party control, Sens. David Perdue and Kelly Loeffler jointly called the their
state’s election system an "embarrassment."
Many Republicans have signaled a December deadline, pointing to the time it took to resolve the disputed
2000 race before Democrat Al Gore conceded to Republican George W. Bush.
"In the end, we want all legal ballots to be counted," the No. 2 House Republican, Steve
Scalise, told The Associated Press in an interview Monday. "You go back to Bush v. Gore, it was
second week of December that it got resolved … so there’s still questions out there that need to get
resolved and that process is playing itself out."
Unlike the 2000 election, when a few hundred votes in Florida separated Bush and Gore, Trump is casting a
wide net of legal challenges in states where Biden is thousands of votes ahead of him.
Some Republicans privately scoff at Trump’s legal team, helmed by personal attorney Rudy Giuliani, and
doubt the president has a credible route to challenge the election results.
Senate Democratic leader Chuck Schumer said Monday the Republicans’ refusal to stand by the election
results is "extremely dangerous, extremely poisonous to our democracy."
Schumer said election lawsuits can be valid but they must be based in evidence and facts. He dismissed
Trump’s challenges as "frivolous."
"Joe Biden won the election fair and square," Schumer said.
McConnell and Republicans said Monday they don’t want the "media" to declare the outcome of the
election.
But actually, the results in the presidential election are being determined much they way they are in all
elections — including those for the House and Senate that are not being questioned — based on an
analysis of vote tallies from the states.
McConnell touted the results Monday of the congressional races — GOP senators brushed back Democratic
challengers and House Republicans expanded their ranks — even as he raised questions about the
presidential contest.
"Let’s not have any lectures, no lectures, about how the president should immediately, cheerfully
accept preliminary election results," McConnell said.
Pressed if there was any evidence of voter fraud, GOP Sen. John Cornyn, who just won reelection in Texas,
demurred.
"That’s really not my, my role," Cornyn told reporters on Capitol Hill. "There is a
process that is available, and I don’t begrudge the president for availing himself of that process — but
in the end, they’re going to have to come up with some facts and evidence."
Privately, Republicans on Capitol Hill have said they are trying to give Trump the time and space he
needs to come to grips with the election results.
"Well, I think he’s got a right, a constitutional right, if there are legal challenges they want to
make," said Sen. John Thune, the No. 2 Republican. "Let those play out."
Republican lawmakers are hesitant to push Trump to concede to Biden, knowing it would anger their base of
Trump’s most devoted supporters. But the Republican lawmakers are not overtly encouraging the
president’s unfounded claims of fraud, even as they fan the flames of doubt in the election process by
allowing questions to linger.
"Stay out of the fray," as one Republican aide put it. The aide and other Republicans were
granted anonymity to frankly discuss the situation.
If it takes a little longer to bring the election to a conclusion, said another Republican aide, "so
be it."
Whatever position the Republicans take, "you’re going to anger half the country," said another
Republican on Capitol Hill.
At the same time, Republicans are feeling increasingly unmoored from the White House. Trump himself has
not been returning some senators’ phone calls, one of the aides said.
Scalise said he spoke to Trump a few days ago and the president "left it all on the field" in
the final weeks of the campaign with a "strong finish."