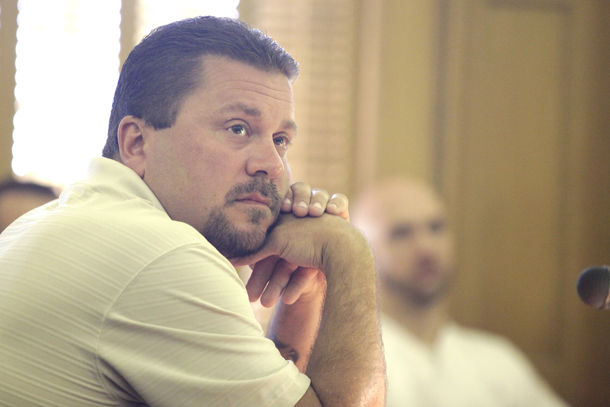 A Sylvania man judged to be a ring-leader in a three-state criminal operation that involved more than 70
people, including his wife and mother, was sentenced to five years in prison Tuesday.
Herbie Betz, 43, appeared in the courtroom of Wood County Judge Robert Pollex.
Betz had a previous eight-year prison sentence in the case overturned early this year, and was granted a
new trial, scheduled for next month. However, Betz pleaded guilty Tuesday to slightly amended charges
and was sentenced immediately thereafter.
Betz was released on bond in February after serving 20 months of his initial eight-year prison term at
the Noble Correctional Institution in Caldwell. He was convicted in 2012 on eight felony counts,
including one count of engaging in a pattern of corrupt activity; one count of money laundering; two
counts of illegal use of food stamps; and four counts of receiving stolen property.
In court Tuesday, Betz pleaded to an amended corrupt activity count, which was reduced from a
first-degree felony to a second-degree felony. The remaining counts were pleaded to as they appeared in
the original 2011 indictment.
He was sentenced to serve an aggregate of five years in prison. Betz must also make a $50,000
restitution.
Betz’s wife, Michelle Betz, 45, was previously sentenced to five years in the case, and his mother,
Thelma Fowler, 71, was previously sentenced to eight years. Both are currently listed as incarcerated at
the Northeast Pre-Release Center.
All three were judged to be ring-leaders in the crime ring, which reportedly operated in Ohio, Michigan
and Indiana.
Herbie Betz’s conviction was reversed by the Sixth Circuit court of appeals in January after it was
judged a mistrial should have been granted in the case. Two jurors had stated they felt intimidated by
actions they reportedly saw undertaken by two of Betz’s family members during a recess in the trial.
However, the jurors were still permitted to deliberate on the case and arrive at a guilty verdict.