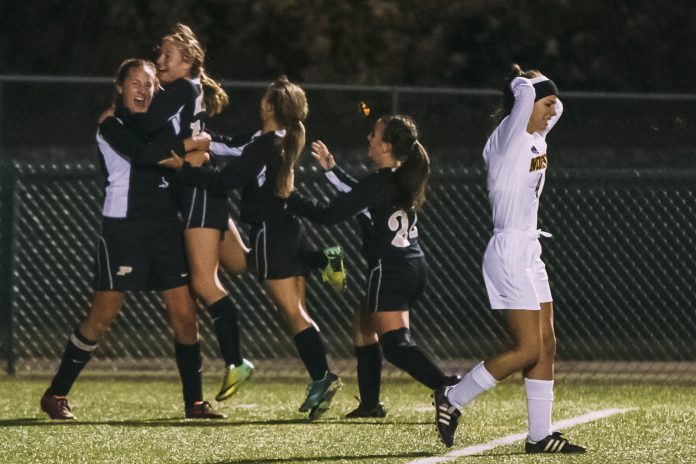 MILLBURY – Like most athletes at this point in the season, Allex Brown isn’t ready for her team to be
done.
So Tuesday night, Perrysburg’s senior forward took matters into her own hands – again.
For the second straight game Brown scored the game-winning goal for the Yellow Jackets, this one with 22
seconds left in regulation to lift her team to a 1-0 win over Northview in a Division I regional
semifinal at Lake Community Stadium.
Brown capped Perrysburg’s late offensive flurry by beating her defender to the right side and drilling a
right-footed shot into the top-left corner of the net from the top-right of the penalty box.
“It was a difficult angle,” said Brown, Perrysburg’s leading scorer with 19 goals. “I didn’t think I had
enough spacing around (the defender), but I’ve hit that shot a couple times before. I didn’t think it
would go in, but it went in. I guess I had the confidence inside me deep down and I just let it fly.
“It’s just the job of the forward,” she said. “You’ve got to pull some strings here and there. You have
to beat some defenders and take some shots because you never know when it’s going to go in. You play a
full 80 minutes of soccer and you’ve got to keep shooting.”
Brown helped extend Perrysburg’s season in a 1-0 win over Anthony Wayne in the district championship on
Oct. 23 when she scored with just over four minutes to play in regulation.
“She has a chip on her shoulder. It’s her senior year,” said Perrysburg co-head coach Jorge Diaz. “She
has been a tremendous player for us. I think she’s our MVP all the way through. I don’t think she wanted
her season to end that way.
“She made an amazing goal,” he said. “I’m still recovering because it was a thriller.”
Perrysburg (16-2-2) will play the winner of Copley/Magnificat in the regional final on Saturday at
Perkins High School at 3 p.m.
The Jackets and Northview, which finished 13-5-2, couldn’t have been more even in Tuesday’s rematch of
their Northern Lakes League showdown on Oct. 8, a match Perrysburg won 2-0.
Perrysburg held a 14-4 advantage in shots, but the majority came from 25 yards out or more due to
Northview’s swarming defense.
The Jackets’ best scoring chance came with 15:22 to play when sophomore Lauren Culp hit the crossbar from
about 30 yards out.
Culp’s shot went clinging away and Perrysburg never had another scoring threat until the final four
minutes.
“Maybe that was their strategy, to defend well and to try to make it to (penalty kicks) and take their
chances,” Diaz said of Northview’s defense.
“We didn’t have as many opportunities,” he said. “They had a great defensive scheme that we tried to pick
a part.”
Northview followed Culp’s near-goal with an opportunity of its own, only to also be denied by the
crossbar.
Freshman McKenzie Johns had a clear shot from 20 yards when her right-footed strike went sailing into the
sky after hitting the bar.
It was Northview’s best scoring opportunity as it only put three shots on goal.
“It was definitely a little scary with our defense in the back,” Brown said. “They had chances to shoot
and they didn’t necessarily take them. We were a little lucky on that.”
Perrysburg was without three players who were suspended for the match. The identities of the players were
not revealed, but they will be cleared to play in the regional final on Saturday.