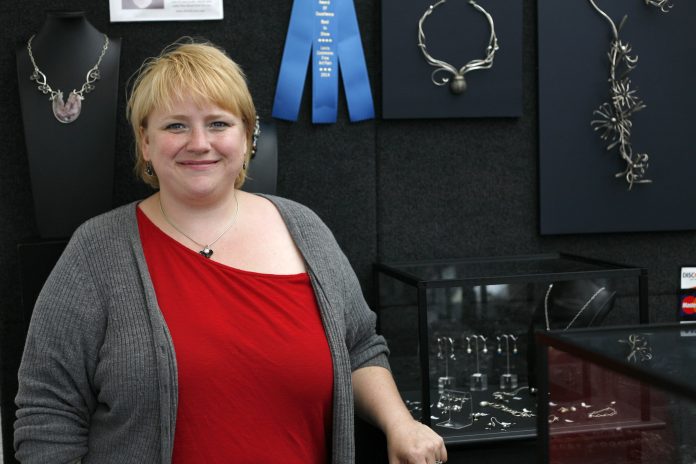 PERRYSBURG – Amy Beeler didn’t set out to be a jeweler.
In high school, she preferred painting and ceramics.
The farm girl from Oregon entered Bowling Green State University in 1996 intending to study biology.
Then looking to take an art elective, she opted to take metalsmithing. "It didn’t have any
prerequisites," she explained.
Her fate was cast. Working with Professor Tom Muir ignited a passion for making jewelry.
This weekend Beeler, a frequent exhibitor at area art fairs, won Best of Show honors at the Levis Commons
Fine Art Fair.
This was her first award at the Perrysburg event after eight years exhibiting. The ribbon was also the
eighth award she’s won in the past year for her work which employs the natural shapes of plants.
Beeler attributed her recent success to another first: a solo gallery show. Her work was exhibited at the
University of Maine after the gallery director discovered her jewelry while jurying a prestigious show
in Tampa, Florida.
She took a year to prepare for the exhibit. "I really put myself into the work." She created
large pieces that challenge the notion of jewelry they could serve just as well as wall hangings, Beeler
said.
During that year of intensive work, she came to view each individual piece as a work of art and that
included the smaller pieces more typical of what she sells at art fairs.
"It pushed me to a new level," Beeler said.
She started to darken her pieces more, using more patinas, bringing out the texture. "Making them
more dramatic," Beeler said.
What’s constant is her concentration on the natural forms of seed pods. She uses them to created molds,
then to cast her silver creations.
Beeler said gallery shows and art fairs are complementary. She loved seeing her work displayed across a
gallery wall with strategic lighting. But nothing, she said, can replace the interaction with art lovers
at a fair.
"The reaction of people who like my work is good for my soul," Beeler said.
The prizes awarded by judge Paula Baldoni of Perrysburg covered a spectrum of work exhibited. Honorable
mentions were: fiber artist JJ Reichert, Bellefontaine; jeweler Lisa Williams, Chicago; painter Susan
Hamady, Ann Arbor, Michigan; and woodworker Ted July, Otisville, Michigan.
The first place award went to Elaine Yang, a fiber artist from Dublin.
Yang said she creates her clothes with the figures of middle-aged women like herself in mind. "I
know what they need. … I want my customers to look very unique and stylish."
She’s constantly coming up with new designs. She especially likes to create items that can have multiple
uses, a scarf if folded one way, a vest if folded another.
Mike Guyot received the second award for his drawings rendered with pen and colored with an acrylic wash.
He greets patrons entering his booth by showing them the type of pen he uses to create his work.
Guyot has been on the art fair circuit for six years and has exhibited at Levis for five.
It’s a second career after he spent time as an illustrator and then an advertising creative director.
Once computers came in clients thought they could do that on their own. Guyot said he meets a lot of
former art directors on the art circuit.
He does everything by hand. The artist from Strongsville draws on themes of regional interest: intriguing
buildings and structures – he calls himself an "architectural impressionist" – and
sports-related images.
That’s what drew Greg Row of Oregon to his booth. Row said that he, his wife and young children have come
to the Perrysburg event for a number of years. The kids get to pick out a piece of art.
Pam Teet, of Martin, was attending for the first year.
She had found some paintings. One a parrot with a Key West, Florida, theme to remind her of where her son
lives, and three paintings depicting friends. It was in fact a friend who brought her to Perrysburg
Sunday.
Teet said she enjoys the range of artistic ideas and appreciates the exhibitors’ "ability to have a
vision and the ability to create it."
That’s the kind of appreciation for the artists and artisans that helps make the Levis show a success,
said Max Clayton, the executive director of the Guild of Artists and Artisans, which produces the show.

When the show started 10 years ago, Clayton said, she expected it to be as successful as it has become.
The community supports it to the point of coming to the information booth to thank the staff.
She estimates 35,000 people attend each year, based on the number of vehicles in the Town Center’s
parking lots. She said she’s very confident at least that many people attended this year.
For artists, she said, the fair offers accessibility, easy set up and an appreciative audience.
"It’s a good crowd," Guyot said. "They know what they’re looking at."