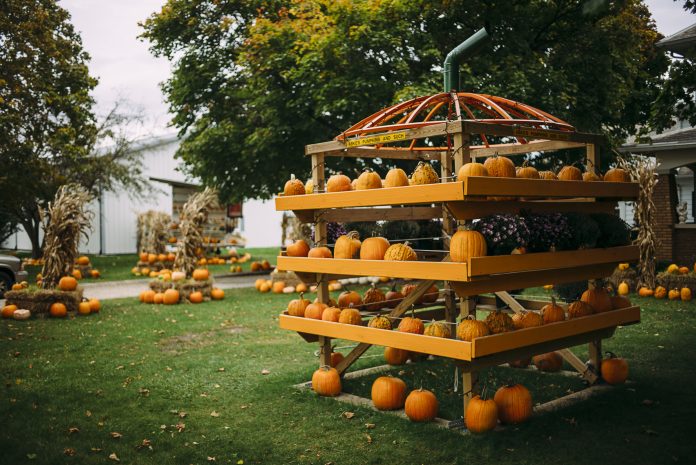 Agritourism is a growing trend with the pumpkin season being a time when area farms are expanding their
small farm roadside stands into seasonal destinations for local people to not only buy pumpkins and
other fall decorations, but also to experience other events.
Three area farms feature hayrides and/or corn mazes to accompany their pumpkins and other items for sale.
Each vendor touted the quality and quantity of pumpkins their patches yielded this year.
•    Pete and Gwen Langenderfer operate Pumpkin Pete’s & Gwen’s Gourds at 10988 Neiderhouse Road,
Perrysburg, where she says they offer both hayrides and a corn maze which were added this year to their
sales of pumpkins, gourds, corn stalks. They also have a barn with chickens. Gwen Langenderfer said the
kids enjoy looking at the hens. They also sell eggs.
The farm is open Fridays from 4 to 9 p.m. and Saturdays and Sundays from 9 a.m. to 9 p.m.
Their pumpkin patch covers about an acre.
"We are a small operation. This is our third year and it’s growing each year," she said.
They can be contacted at 419-654-6304.
•    Rick Johnson owns The Pumpkin Peddler at 20354 North Dixie Highway, Bowling Green, where Johnson
said, "The fall season just isn’t complete without a hayride to a pumpkin patch."
The hayride takes visitors not only to the pumpkin patch, but also through the companion Christmas tree
farm for Rick and Carl’s trees.
People can buy from the pumpkins on display at the craft store at the location or pick their own from the
field.
"This has been one of our best years," Johnson said noting his 20 years in the pumpkin
business. "The cooler temperatures combined with the rains at the right time were ideal."
The store is open daily with hayrides offered on the weekends.
There are thousands to choose from and children can pick their own pumpkins right in the field. Families
can enjoy other activities as well, such as a pumpkin maze, face painting, and guessing the weight of a
painted pumpkin.
The farm has a three-acre pumpkin patch onsite with another four acres elsewhere.
The craft store sells Indian corn, gourds, mini and pie pumpkins, straw bales, corn stalks and other fall
and Halloween decorations. Cookies and apple cider enhance the family atmosphere.
The business may be contacted at 419-409-0252.
•    Russ and Marcy Abke run Abke’s Pumpkins n’ Such, 2990 Sugar Ridge Road, Pemberville, where the
facility also offers a small corn maze and a country store.
Ten years ago, the couple started with a little pumpkin patch at their previous home. When they moved to
the current location they began with about one-half of an acre. The patch now covers four acres growing
48 different varieties of pumpkins and other gourds and squash.
"People like the variety, people have been coming back for six years, we have a real loyal
following," Russ Abke said of his customers.
He said each year they grow additional sizes and shapes of pumpkins to see what works.
Many of the varieties they call their "stackers."
The various stackers are literally stacked on top of each other.
"People love them," he said. "Ladies will spend hour after hour trying to get the perfect
stack."
Among the more unusual varieties are the Yugoslavian fingers, a variety when inverted and painted can
resemble a spider or other unusual creations.
He indicated many customers return each year, some visiting two or three times each season. He said they
first come and buy pumpkins and gourds to decorate both inside and outside their home, only to return a
couple of weeks later to add and fill in their decorations.
"Then in October they come to get their carvers," he said.
Marcy Abke also noted the popularity of the Amish mums they offer for sale.
This is the seventh year for their operation which is often called "Abke’s Corner."
She says the business is more like a family hobby and friendship circle.
"It’s great to see friends each year at the pumpkin patch. It’s also great fun decorating the
corner. It’s fun for the family.
Their painted pumpkins are novelty items which Russ Abke says provide great photo opportunities.
He noted the good crop they have available this year, with his wife echoing Johnson’s assessment of
having the good temperatures and rains coming at the right time.
She explained with the great crop they have also increased their volume of donated pumpkins, primarily to
support youth groups.
The store is open on weekends from 9 a.m. to 6 p.m. with occasional unscheduled weekday times. The store
offers many handmade items, along with ornamental gourds, and various familiar squash varieties such as
acorn, butternut and spaghetti. They also offer special varieties including L’il Dumpling and Blue
Husband. Corn shocks and straw by the bale are also for sale.
The Abkes can be reached at 419-287-4574.